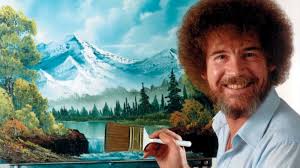 Ross’ how-to painting show, “The Joy of Painting,” was first broadcast on public television in 1983 and ended in 1994. Over the course of the show’s 403 episodes, Ross completed more than 1,000 painting, all of them landscapes.

Now, more than two decades after his death in 1995, his work is finally being exhibited — outside his own gallery — in a solo show.

“Happy Accidents: An Exhibit of Original Bob Ross Paintings” features 24 works from the long-running series, at the Franklin Park Arts Center in Purcellville, Virginia, about 50 miles from Washington, DC.

The exhibit is small and free of charge — probably like he would have wanted it — and its title is a homage to Bob Ross’ most famous catchphrase and painting mantra: “We don’t make mistakes here, we have happy accidents.”

Ross’ popularity has soared in recent years, as reruns from “The Joy of Painting” continue to air in syndication in the United States.

In 2015, live streaming platform Twitch hosted a nine-day marathon of the show, renewing his fame among younger viewers. All episodes are also available on YouTube, where the most-watched one, from 1993, has garnered 21 million views.

There’s no big secret to this enduring popularity: It’s just hard to stop watching a Bob Ross show. Try it. His soothing voice and enchanting delivery seems to transcend the act of painting. Bob Ross, Inc. estimates that just about 3% of TV viewers were actually painting along.

“I talk to only one person when I’m filming, and I’m really crazy about that person. It’s a one-on-one situation — and I think people realize that, and they feel that they know me and I feel that I know them,” Bob Ross is quoted as saying in a 2011 PBS documentary about his life.

The leafy landscapes he painted, often dominated by trees and mountains suggestive of Alaska, where he spent years as an Air Force sergeant, might feel repetitive, but seeing them come to life from just a few broad smudges of color makes for an irresistible journey. The traditional technique Ross used, known as “wet on wet,” allowed him to paint quickly under the principle of thinner paint sticking to thicker paint, so that he could finish an entire artwork in each episode.

“Let your imagination take you to worlds that only exist in your mind. No bad stuff here. That’s why we have happy little trees. Everything’s happy here,” he said in a episode.

His signature outfit — a button-down or chambray shirt neatly tucked into blue jeans — was perhaps at odds with his slightly unkempt beard and gigantic perm. Yet the perm — a cost saving measure to avoid haircuts — cemented his persona to the point that even once he grew to despise it, he could no longer get rid of it. It had become the logo of his own company.

Ross made three nearly identical paintings for each episode: One before taping the show, as a reference, one during the half-hour show, in real time, and one after the show, which he spent up to two hours on, to be photographed for the instructional books that he put out with each season of the show. He recorded four seasons a year and was taping season 32 when he could no longer continue due to illness. He died in 1995 from lymphoma, aged 52.

Almost all of the paintings he produced are still owned by Bob Ross Inc, the company he founded with his business partner, Annette Kowalski. She’s the one who “discovered” Bob Ross, while attending one of his painting classes in Clearwater, Florida, in 1981. Today, the company is run by Annette’s daughter, Joan, and still sells painting supplies, books and other Bob Ross-themed paraphernalia.

“We have over a thousand paintings,” said Joan Kowalski in a phone interview. “We don’t have them all because Bob was very generous and donated some to friends and people that would come to visit him in the studio.”

“We get quite a lot inquiries from charities and lots of inquiries from people who would like to purchase them. But we don’t donate paintings now — normally we’ll send paint kits or canvases instead — and we don’t sell them at all,” said Kowalski.

Kowalski did make one exception, however, for the Smithsonian Institution, which acquired some of Ross’ paintings and tools a few months back. “We knew that Bob had always sort of imagined, ‘Wouldn’t it be wonderful if my paintings were in the Smithsonian? That way people would want to learn to paint!’ When he died, we decided to try, but nothing ever came of our efforts. My assistant then found out there is a place on the Smithsonian website where you can apply for a show. And she heard back from them and they were quite interested. That’s how we got in.”

The Smithsonian has not yet exhibited the items — although Kowalski is hopeful it will — but the exchange planted the seed for an exhibition of Ross’ artworks. The curator of the exhibit at the Franklin Park Arts Center, Elizabeth Bracey, is a friend of Kowalski and the venue is just 30 miles from the Bob Ross, Inc. offices.

“It came to be as a very happy accident. Elizabeth asked me to exhibit some of Bob’s paintings in the facility that she works at and, to be honest with you, we’ve never really been asked before, which is a little bit crazy. It was not really strategically planned, it was just sort of a handshake agreement, but then the word got out and now they are just being inundated with requests for tickets. I love that story, because it’s just sort of how everything seems to happen with Bob Ross — small things become wonderful and significant,” said Kowalski.

Bob Ross didn’t have high expectations for his paintings outside of his TV show. “I’m trying to teach a form of art that anybody can do, it’s not traditional art, it’s not fine art, and I don’t try to tell anybody it is,” he said in an episode of the Phil Donahue Show in 1994.

“But art’s purpose is to evoke emotion and reaction. And there’s a very emotional reaction that people have when you see the paintings in person. Most of the pieces were created in 30 minutes or less and it’s amazing to see the beauty and the wonder that he was able to create with this very fast and simple technique,” she added.

Nevertheless, tickets for the exhibition, which are free, are almost all gone, but Kowalski said further exhibits are already planned for next year in various locations across the US and Canada – mostly small venues in small towns – as well as Belgium and the Netherlands.

She believes Ross would be thrilled about his popularity in the internet era. And that yes, he was really like his TV persona. “He was the same on television as he was in person. He was absolutely exactly the same. That was Bob Ross.”

“Happy Accidents: An Exhibit of Original Bob Ross Paintings” is on at the Franklin Park Arts Center from Sept. 10 to Oct. 15, 2019.