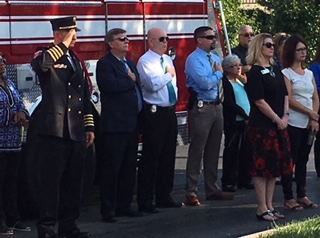 (BLOOMINGTON) –  For the last seventeen years, Monroe County Emergency Services Personnel gather to remember the men and women who lost their lives on that fateful September morning.

Much like this September morning, the sun was shining. It was a spectacular morning, with individuals going about their regular routines.

At 8:46 a.m. American Airlines Flight 11 crashed into the north face of One World Trade Center at approximately 466 mph between floors 93 and 99.

This would start a series of events that day that would impact our country from that point forward and continues yet to this day.

At 9:03 a.m. United Flight 175 crashed into the south face of Two World Trade Center at approximately 590 mph between floors 77 and 85. Following this crash, most of the Nation realized New York City was under attack.

At 9:37 a.m. American Airlines Flight 77 crashed into the western face of the Pentagon consisting mainly of newly renovated unoccupied offices.

Then, at 10:03 a.m. United Airlines Flight 93 crashed into an open field near Shanksville, PA. It is believed the passengers prevented the plane from crashing into the White House or Capitol Building.

Today’s ceremony started with retired Bloomington Firefighter and Chaplin Harold Godsey reading Proverbs 14:12 – There is a way which seemeth right unto a man, but the end thereof are ways of death.

Mentioning the song sung by Frank Sinatra that I Did It My Way. “However, we need our country to turn it’s heart towards God, and in turn he will turn his blessings towards us,” he added.

He then led the crowd in a prayer.

Bloomington Professional Firefighters Local 586 Union President  Josh Tapp talked about the many emergency personnel who lost their lives that day.

He then addressed how federal politicians have already forgotten those that died, and the many experiencing health-related issues following 9/11.

He says it took a public intervention and pressure to reinstate the benefits owed to emergency personnel.

“It should have never been a political issue,” Tapp empathized.

Then a few days later came to a plea from an NYPD police officer dying from cancer asking for funding to be restored.

“We must never forget these men and women facing danger, uncertainty, and consequences of wearing their uniform. And long after they take that uniform off,” Tapp continued. “We must make sure the men and women are taken care of when they wear the uniform, the time they take it off, and through retirement,” Tapp concluded.

Mayor John Hamilton made comparisons with 9/11 and the attack at Pearl Harbor where 2,400 lost their lives. He noted healing must take place. He noted that Honolulu and Hiroshima became sister cities in 1959 to start that healing process, even though the hurt, scars, and the uncertainty that existed in the 1950s. Now, both cities work worldwide to bring forth peace.  He concluded his speech with a question, “Where are the Peacemakers?”

Former Indianapolis Fire Chief and Former Indiana State Fire Marshall Jim Greeson commented on what he was doing that fateful day. Being a shift commander of the “A” Shift of 244 firefighters that day, his brother-in-law notified him of the first plane crash. Then, while watching on television, he witnessed the second plane hit the other tower. New York and the county was under attack.

Greeson reflected on the many firefighters he came to know from the NYFD through Task Force 1, and the training seminars held by the FDIC in Indianapolis over the years.  He mentioned Raymond Downey who was the Special Operations Chief that day. Downey was also a firefighter for the Oklahoma City Fire Department during the bombing of the Alfred P. Murray Federal Building in 1995.

On September 11, 2001, Downey died in the collapse of the World Trade Center Buildings. Chief Downey’s body was never found.

Following the speeches was the laying of the wreath, Taps and a 21-Gun Salute performed by the Honor Guard of the Bloomington Fire Department. The singing of Amazing Grace concluding the ceremony.

Bloomington Fire Chief Jason Moore commented, “It is always good to honor the past, to know where we came from, and embrace the future and where we are headed.”

Colleen Mullinix, who attended the ceremony, stated, “I was working for a security firm, working from home. My television was on when I heard that a plane crashed into the tower. Then, when I heard about the second plane, I became very interested in it. Tried to call my company in Minnesota but no one that day answered their phone. It was a gut punch to me. I think this is an awesome event to honor our first responders to honor their bravery, and remember that day,” Mullinix stated.