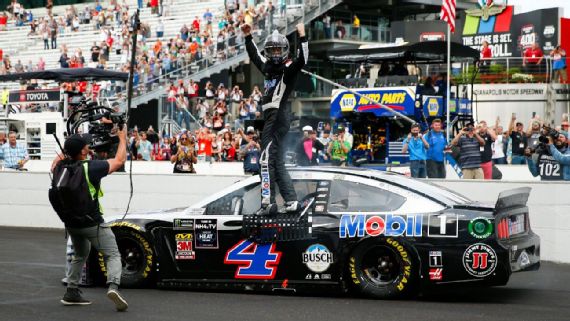 (SPEEDWAY, Ind.) – Kevin Harvick started on pole and led 118 laps en route to a win in the 26th running for the Brickyard 400 on Sunday.

“This is great,” Harvick said after the race. “Indianapolis means so much to me, Rick Mears was my hero, watching him win in Indy and then doing it myself is pretty awesome!”

He would run away from Joey Logano, who took second, and Bubba Wallace, who had a career best finish, in third.

Harvick led the field to the green flag and led the majority of the first stage, but it would be Joey Lagano who would win the stage and securing an ever precious playoff point as part of the MENC playoffs. The stage ended under caution thanks to a spectacular crash that saw Erik Jones and Brad Keselowski get each other loose out of turn two.

Keselowski, who won the race last year, was sent hard into a tire barrier on the infield. The car was resting sideways in amongst the tires.

Stage two would offer just as much excitement with Harvick continuing to lead, but near the end of the stage regular season champion Kyle Busch would exit the race with a blown engine. It’s Busch’s first DNF of the season.

“I thought we were going to have a solid finish, come out of here with some points,” Busch said. “But, we’re stuck here and on to Vegas.”

As it would play out off the Busch caution Harvick would win the stage.

The final stage kicked off with Jimmie Johnson wrecking out of the race, ending his chances of making the playoffs.

Kevin Harvick would choose the inside line on the restart. That would prove to be a near fatal mistake as second place Ryan Blaney would slingshot around the faster outside lane to take the lead with just over 60 laps left in the race.

A flurry of caution flags later, it would be Harvick crossing the line first to win his third Brickyard 400.

“This team built a heck of a racecar,” said Harvick. “I know how much this means to them. It all work out our way. The way the cautions fell today worked in our favor.”

South Bend, Indiana-native Ryan Newman would finish 8th and secure the 16th and final spot in playoffs. He joins Clint Bowyer who was also on the bubble.

Next week the series heads to Las Vegas for the first round of the Monster Energy NASCAR Cup Playoffs.