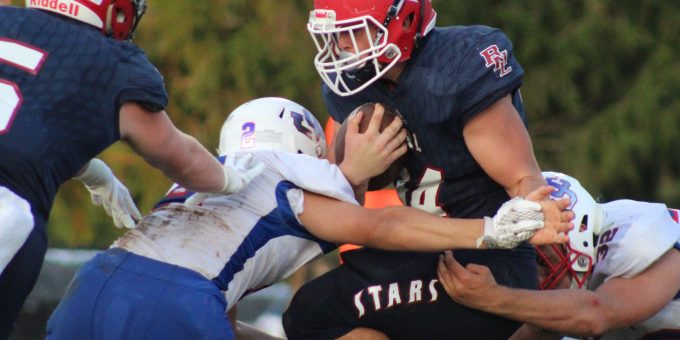 (BEDFORD) – Tired of being whipped and stomped, Bedford North Lawrence vented its frustrations on the first available target.

With its option offense clicking, with an energized defense swarming until it tired in unfamiliar territory in the second half, with the clock operating normally, BNL thrashed the Panthers 50-21 on Friday night, winning its home and Hoosier Hills Conference debut in grand style.

Senior quarterback Dalton Nikirk threw for 226 yards, BNL’s ground attack churned without much resistance, and the Stars (1-2) made it to the second half intact for the first time. They threatened to treat Jennings like they had been punished the first two weeks, but fatigue created some faults as the Panthers scored three times in the final 16 minutes.

BNL coach Steve Weber was worried about Jennings, which was averaging 35 points per game and coming off a win. His postgame was part relief, part satisfaction for a team that desperately needed a victory to celebrate.

“We really needed it, everybody needed that win,” Weber said. “But we still have things to take care of. I just wanted them to play well, and it was a good game for them. I’m relieved, but we have to dig into it.”

The digging can wait a little while. There was already much planted this night.

BNL jolted into gear quickly, taking a 7-0 lead on Skyler Bates’ 13-yard romp into the right corner of the end zone. The Stars added a safety on the next Jennings series when a punt snap sailed over the head of JC’s Jaden Vanosdol and out of the end zone.

The Stars followed that with a touchdown on the next drive, with Tabin Stillions crashing home from 10 yards, and the confidence started to ooze. Funny how just a little success can create that.

From there, the Stars were almost unstoppable. Owen Beaver’s 8-yard burst (set up by a 58-yard connection from Nikirk to Derek Hutchens) with 1:04 left in the half gave BNL a 23-0 advantage, and the Stars started the second half with Justice Woods’ TD blast for a 30-0 lead. Mercy rule, anyone?

Jennings didn’t allow it. Owen Deaton scored the first of his three touchdowns on three consecutive possessions. But BNL kept the throttle mash down as Nikirk hit Hutchens for a beautiful 65-yard bomb, and Nikirk added his own 18-yard rip up the middle midway through the fourth quarter.

Nikirk was 10 of 15 passing and added a team-high 76 rushing yards.

“He did a good job,” Weber said. “He operated the option well, protected the ball, which is very important to me. He made some good reads.”

“I had a lot more time,and I was proud of my linemen for that,” Nikirk said. “They need more credit.”

Hutchens caught 5 passes for 187 yards. The only issue for the offense was the first-half injury to Bates, who went down clutching a left knee and spent the second half in street clothes with an ice pack strapped on the pained area.

The Panthers (1-2, 0-1) finished with solid numbers. Lance Bailey was 13 of 20 passing for 125 yards, added a team-best 79 rushing yards, and caught a 47-yard reverse pass. Not a bad night’s work. Jared Corya caught 8 passes for 78 yards. Most of that was accomplished in the latter stages.

“We came out flat, in all phases,” JC coach Justun Sharp said. “We fell apart as our offense continued up to struggle.”

BNL’s defense, often shredded, can take some of that credit. Shifted personnel and an attack style made a difference.

“We were tired of getting stomped on,” junior linebacker James Underwood said. “Getting a win by a lot of points, that was really good.”

“Hopefully it picks up momentum,” Nikirk said. “We need to win next week but it feels good to have this one.”

BNL will celebrate Homecoming and clash with Madison next week. The Cubs fell to 0-3 with a 49-7 loss to Seymour.

“We still have more work to do, but we’re going in the right direction,” Weber said.