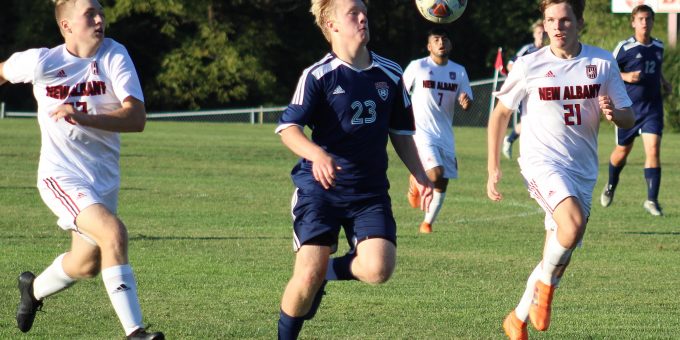 (BEDFORD) – No matter how many times Bedford North Lawrence coach Logan Jackson glanced at the scoreboard clock, with his defense under fire, time didn’t run any faster. That’s a shame, for fewer ticks would have meant fewer kicks at his net.

After trailing for 61 minutes, New Albany finally netted the equalizer, escaping with a 1-1 deadlock on a late, muddy-water goal by Davis Krebs. The Stars (3-3-1) were so close to a defining victory, but the tie certainly beats the alternative.

Most sports determine a winner. So it’s difficult to digest and react to a standoff. For BNL, it was bittersweet, to hold the upper hand for so long and walk away with nothing tangible to show for a lot of hard work.

Would Jackson take it? “I think so,” he said. “We played really well. We kind of got away from what we wanted to in the second half, We were a little tired. I wish we could have come out with a win, but it happens.”

Here’s what happened, an 80-minute story shortened to the cliff notes: BNL scored its goal at 28:12 in the first half, when Jacob Kolk clobbered home a penalty kick. The Bulldogs (4-2-2, 0–0-1 in the Hoosier Hills Conference) answered with 7:18 left, as the Stars failed to clear a loose ball from the goal’s doorstep and paid the penalty.

“You have to get that out,” Jackson said. “It seemed like it was down there forever.”

Forever was BNL’s ownership of the lead. The Stars (0-1-1 in the HHC) were awarded the unguarded shot when offensive point man Josh Anderson was taken down in the penalty box. Kolk cracked his shot into the lower right corner.

New Albany, after some thunderous suggestions from coach Josh Dickman during the intermission, turned up the pressure midway through the second half, pinning the Stars down with a series of corner kicks. The last one hurt as Krebs got free in front and disturbed the back of the net.

“We didn’t show up in the first half,” said Dickman, a 1993 New Albany graduate who is the program’s all-time scoring and assist leader. “Something had to change. You just have to ramp up your effort.

“Things weren’t going our way, balls weren’t bouncing our way, our finishing was atrocious, So you have to outwork them. And they did, they responded in the second half. We just couldn’t find the net more than once.”

“Our defense showed up tonight,” Jackson said. “We shut them down, they have very few opportunities straight to the goal. We had a couple of opportunities, we just couldn’t get one to fall. We missed some, but it happens in the spur of the moment.”

BNL will host Evansville Christian on Saturday at 1 p.m.