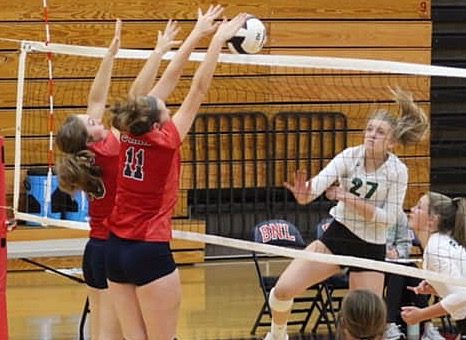 (BEDFORD) – Floyd Central plays, according to MaxPreps, the toughest schedule in the state of Indiana. So the record, especially with a roster full of sophomores and freshmen, is quite misleading.

The Highlanders, always among the powers in the Hoosier Hills Conference, conquered Bedford North Lawrence in straight sets on Thursday night, marching to a 25-14, 25-14, 25-20 victory.

Floyd improved to 3-4, heading into a weekend tournament with the top two teams in the country on the horizon, while the Stars slumped to 1-10 (0-2 in the HHC).

The Highlanders vaulted to early leads in the first two sets (6-1 and 10-4) and never allowed BNL to gain solid footing.

“We did compete,” BNL coach Jordan Robbins said. “We’re so used to losing, we don’t know what to do when we’re tied, up, or even down a couple of points.

“They’re just a good team. They always are. When they come in, they’re going to give us a fight, whether we’re ready or not. I don’t know that we were scared, but that’s what it looks like, And when we get in those holes, it’s hard to recover.”

BNL played without sophomore setter Merritt Callahan, on the sideline for concussion protocol after absorbing a hit to the head via a hard landing on Saturday. That forced the Stars to scramble the lineup.

“Having Merritt is a big one for us,” Robbins said. “She brings energy and kids look to her for leadership. Our kids are used to having to adapt. We have to move kids around.”

Haley Deckard led the Stars with 10 kills, Annie Waggoner had 22 assists and 8 digs while hitting 8 of 9 serves, Carlee Kern was 7 of 8 serving with 3 aces and 4 kills, and Maddy Bennett added 5 kills and 11 digs.

BNL missed seven serves, too many points to give away against quality competition.

“We can’t do that,” Robbins said. “We can’t afford to give those way. And we have to find a block, someone who will decide they’re not going to let the ball over the net. We have to keep improving and that’s all I can ask at this point.”