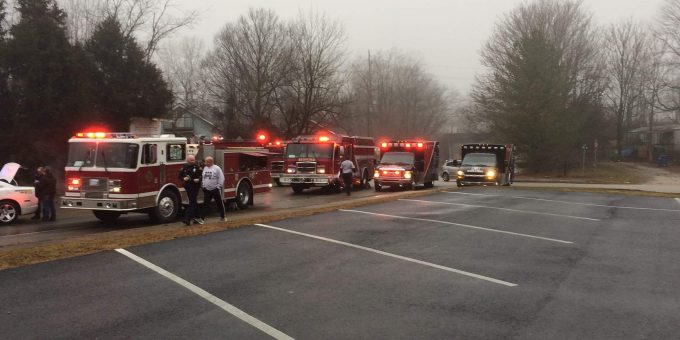 (BEDFORD) – The Lawrence County 9-1-1 Board approved an agreement between IU Health Hospital and AMR Ambulance Services to make sure an ambulance is available in the county at all times.

Numerous times over the last few years, Lawrence County’s ambulance services have not had any ambulances available to respond to 911 calls.

In a previous story, lift assistance and abuse of the ambulance service were cited as a culprit for the county having no ambulances available.

A second reason for the availability of ambulances is due to the frequent transfers of patients from local hospitals to other hospitals outside of Lawrence County.

EMS Manager at IU Health Hospital Graham Judd and AMR EMS Manager Josh Davis sat down with one another to help work out some of the issues that have overwhelmed the Emergency Medical System.

A 9-1-1 policy was drafted among the two ambulance services and was approved by the Lawrence County 9-1-1 Board Thursday morning.

This is the copy of the letter the 9-1-1 Board Received Thursday morning.

I would like to inquire about any current policy that ensures that Lawrence County and the City of Bedford have a minimum level of EMS Coverage for 9-1-1 responses. Specifically, I would like to know that there is an understanding that if either IU Health or AMR is the last unit available, that unit will remain available for 9-1-1 coverage unless  one of the following occurs:

It is my recommendation that all Emergency Medical Services serving Lawrence County be in agreement and following one standard policy. The intent is to ensure the citizens of the community have confidence in timely Emergency Medical Services response and that the critical access hospitals locally can transfer patients to a higher level of care as seamlessly as possible.

The Lawrence County Police Department released call volumes for various emergencies in Lawrence County.  In the report, there was a total of  233  falls and 208 Lift assistance calls from January 1st until August 31st of this year.

Over the last couple of years, Emergency Medical Systems across southern Indiana have been relying on Mutual Aid response from other ambulance services to respond to other counties when they no longer have an ambulance available.

“We are bridging some of the gaps in Emergency Medical Services coverage,” said Josh Davis AMR Ambulance Service Director in Bedford.

There are four to five ambulances covering Lawrence County between the two ambulance services. However, both ambulance services transfer patients to other hospitals. It takes around an hour, up to four hours or longer if an ambulance crew transports a patient to Indianapolis.

During larger event, like ones held at Lawrence County Recreation Park in Springville, there were a few occasions that residents had to wait on an out of county ambulance services to respond to emergencies. That made for a 20-30 minute response times, according to Jeff Long Perry Township Fire Chief.

This policy will not always prevent the lack of ambulance due to the number of 9-1-1 calls coming in at the same time. However, this policy will help make sure that there will be at least one ambulance available for emergencies in Lawrence County.