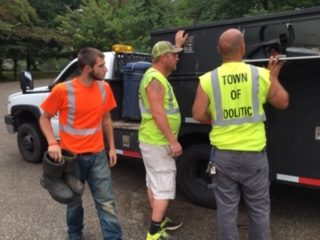 (OOLITIC) – Each day brings different tasks for Oolitic Town employees Zach Bell, Wes Tipton, and Jesse Cox. The three men never know what to expect from day to day, trying to keep the town clean and the town’s water and sewer system running.

The crews also try to solve many complaints that are reported to the Clerk-Treasurers Office or solve complaints they receive from residents while working around the town.

“Many issues date back to almost four years ago,” says Zach Bell. “We know some have been promised things will get done, but it has taken us a while to get to some of those issues.”

When a complaint is received it is placed on board at the office and the crews will see if they need parts to make the needed repairs. Once the parts come in, the crew will put in a work order and complete the job.

“We track and record it so if someone wonders why it is not taken care of yet, we have a way to track it start to finish,” Bell added.

Continuous water and sewer issues have been taking the town by storm.

“When a water leak comes in, we stop what we are doing and address that issue immediately,” Bell added. “We are currently almost two months behind in getting the everyday complaints taken care of.”

Earlier this year, all of the street employees quit following several complaints from the residents of things not getting done. Town officials then hired Zach Bell and Wes Tipton and they have hit the road running to get things done.

In the month of August, crews repaired the following:

The August list did not include the water leaks the crew repaired last week.

Bell says an upcoming grant will focus on at least four to five areas in the town that need to be adjusted for storm runoff that have been of major concern this year.

The City of Bedford has been helping the town address some of the issues of drains along the town’s right of ways stopping up and being obstructed by trees, plants, and vegetation.

“Presently, we are about two months behind on getting the issues addressed that people have reported to us. We will work hard to address those concerns. But emergencies sometimes take us off our list. And we want to thank the many people that have given us water, thanked us for our work. There are times we do not even get lunch because we just work through to get things done. Please be patient with us,” said Bell. “Thursdays are normally trash days, and usually we start at 8 a.m. and usually finish up around 3 p.m., but that is us working straight through,” he added.