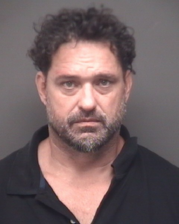 (WARRICK CO.) – A approximately 3:10, a.m. Saturday, Indian State Police Trooper Kyle Otolski was patrolling in the area of Bell Road and State Road 261 when he observed the driver of a white Ford F150 pickup truck fail to signal.

Trooper Otolski activated his emergency lights to conduct a traffic stop, but the driver accelerated north on State Road 261 and then turned east onto Robin Hill into South Broadview subdivision.

The driver turned off the vehicle’s headlights and disregarded several stop signs before finally stopping on Oak Lawn west of Lenn Road. The driver exited the vehicle and was arrested without further incident.

The driver was identified as Adam Rankin, 49, of Owensboro, KY.

While walking around the vehicle the K-9 alerted to the presence of narcotics inside the vehicle.

Rankin was transported to the Warrick County Jail where he is currently being held on bond on charges of resisting arrest, possession of meth, reckless driving.