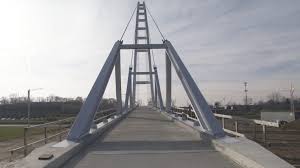 (FORT WAYNE) — A pedestrian bridge that will link two college campuses in Fort Wayne is still undergoing safety testing more than a year after its projected opening date.

The bridge was initially set to open in August 2018 to connect Purdue University Fort Wayne and Ivy Tech Community College over a busy roadway, but its opening was delayed after testing of its cables produced inconsistent readings.

A pier was subsequently added to boost the span’s ability to carry extreme loads during adverse conditions, such as high winds.

Nichole Thomas is a spokeswoman for the Indiana Department of Transportation. She tells The Journal Gazette the bridge “has a lot of eyes on it” as testing continues on the altered design.

Officials estimate about 1,000 students will use the span daily once it opens.