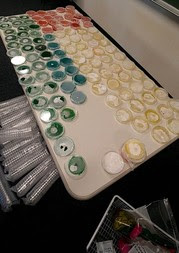 (CHARLESTOWN) – On Tuesday, Troopers from the Sellersburg All Crimes Policing (ACP) squad arrested a Charlestown couple for growing and dealing psilocybin (psychedelic mushrooms) and possession of marijuana.

Acting on a tip, Trooper Brett Walters and Sergeant Katrina Smith of the Sellersburg ACP squad arrived at 274 Woodridge Drive in Charlestown to investigate possible drug activity. Information gathered and observed while at the property prompted officers to seek a search warrant, which was granted by a Clark County judge and immediately served.

As a result of the investigation, Troopers arrested 29-year-old Jedidiah Lee Adams, and 31-year-old Bailey Michelle Rutkowski, both of 274 Woodridge Drive on the following charges:

Both subjects were transported and incarcerated at the Clark County Jail.