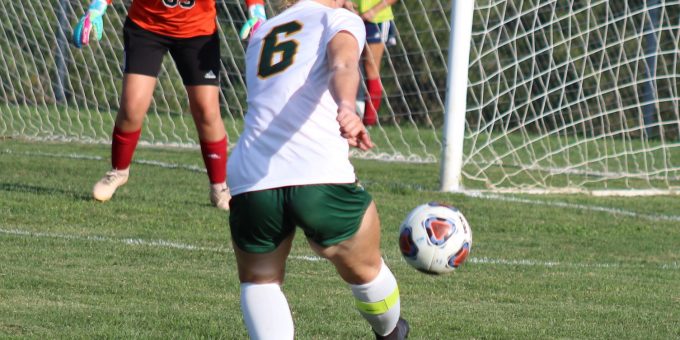 The powerful Highlanders, making their belated season debut, shot down the Stars 7-1 on Tuesday afternoon, blasting away at unprotected BNL goalie Hannah Riester with 23 shots. Audrey Brumfield recorded a hat trick (in the first 26 minutes) to spearhead the Highlanders.

BNL (0-2, 0-1 in the Hoosier Hills Conference) employed the aggressive defensive stance, pushing the back wall defenders up the field to create pressure. Floyd responded with long, lofted passes into open space, and Brumfield converted those into goals. Ella Lavigne added a pair of goals.

Brumfield’s first goal came at 31:10 in the first half, and she followed with conversions at 27:16 and 14:06. All were the same type – winning races to long passes and cracking shots past Riester, who was hesitant (at first) to stray too far from the net.

“We’re going to play high line and teams will kick the ball over our heads,” BNL coach D.J. West explained. “I want my keeper, like she was doing in the second half, to kick those balls out, get them out of there.”

Here’s the real kicker. Riester was brilliant in goal, making seven spectacular saves – diving, lunging, absorbing point-blank rockets – to keep the score and damage to a minimum. Not bad for a kid playing out of position by necessity.

It was dangerous. Floyd’s fourth goal of the first half was Lavigne’s rebound off a Riester body block.

The Stars scored late in the first half, with Makena Moore converting a penalty kick following a Floyd hand-ball foul in the box with 32.1 seconds left.

“We’re happy to get the ball rolling,” Stevens said. “We’re still finding our way, too.”

“I was really encouraged,” West said. “I know the scoreboard says 7-1, but we played better than our last game. We got more shots on goals, some quality shots on goal.”

BNL will return to action on Saturday, hosting New Albany at 11 a.m.