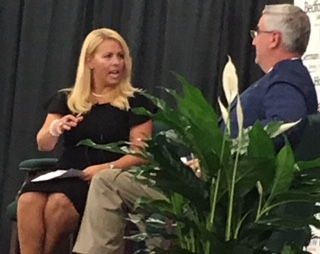 (BEDFORD) – More than 400 attended the Bedford Chamber of Commerce’s 103rd Chamber Dinner in addition to Indiana Governor of Indiana Eric J. Holcomb speaking at the event.

Before the awards were given out, Bedford Mayor Shawna Girgis asked the Indiana Governor several questions regarding several programs and initiatives that the  City of Bedford could benefit from. This was done as a “Fireside Chat” so businesses in the community could learn about programs to help build their business and workforce.

Governor Holcomb touted infrastructure programs for the state’s highways, internet, workforce development and addressed the issue about legalizing marijuana in Indiana. On a lighter note, he talked about his dog Henry, and throwing free-throws across Indiana’s 92 counties.

Former Lt. Governor Becky Skillman attended the Chamber Dinner, and Governor Holcomb noted the Daniels and Skillman’s Administration for their work in bringing jobs and better highways to Indiana.

“Our administration is just building off that work to make things better five, ten, and 15 years down the road,” he added.

One of the topics discussed was workforce development and training today’s workforce for future jobs. To help fill some of those jobs, Indiana has turned to the prison system to help. One of those programs is called “The Last Mile.”

There are more than 27,000 Hoosiers in the prison system. By 2020 “The Last Mile” program expects to graduate more than 1,000 inmates annually by 2020 in certificate programs that will lead to good jobs once they get out.

With the program, there is a 0 percent recidivism rate among graduates, and 100 percent get a job or continue their education after release. Governor Holcomb also was thankful that Indiana’s unemployment rate is at an all-time low of 3.4 percent following one of the highest unemployment rates in the year 2009.

The “Next Level Jobs” Program started around 2017 and works to provide free training for working Hoosiers in the state’s highest demand jobs. These industries have higher median salaried jobs and are rapidly growing in Indiana. The jobs include Advanced Manufacturing, Building, and Construction, Health & Life Sciences, IT & Business, Transportation, and Logistics.

Half of Indiana’s budget is dedicated to K-12 education. The State of Indiana has increased the education budget to $753,000 million. The goal is to build partnerships between the state, business, and schools to develop a strong, well-educated workforce. Now business is starting to offer internships to students while they are in school. In Indiana, the governor noted that 153,000 Hoosiers have no education, and more than 450,000 Hoosiers started out seeking higher education but never completed college.

“We must find out why,” Holcomb exclaimed.

The “Next Level Trails” programs were discussed as the state plans to have a trail available to Hoosiers within 5 miles of their home with trails extended from New Albany to Bedford.

The state has partnered with private organizations to raise more than $90 billion to build trails across the state. In the first round of funding 17 trail projects, ten regionally significant and seven locally significant projects were awarded. This included more than $24.9 million in Next Level Trails grant funding combined with $12.5 million in local match value, with a total investment of $37.4 million. This allowed the development of more than 42 miles of trails in 17 Indiana counties. The next round of trail development grant funding stands around $30 million.

“It important you start engaging with the Indiana Department of Natural Resources and talk to Dan Bortner and start engaging in that process.” Governor Holcomb added.

Some of the other infrastructure issues addressed during the “Fireside Chat” was Broadband for rural communities, and water/sewer infrastructure and finding ways to help local government address these issues.

Governor Holcomb was still slow to embrace legalizing marijuana, as he says that many think the state should just go after the revenue that legalization of marijuana brings to other states.

“Legalizing marijuana has also cost those states,” he added. “I have taken an oath to uphold the laws of both the United States and Indiana. Until the federal government changes those laws, I will uphold the federal law.”

“We need to do further research on whether marijuana is effective in helping with medical conditions. Both Indiana University and Purdue University have agreed to do that research,” he added.

Holcomb also stated that he had been to the White House to discuss the issue. Holcomb remained cold to the idea of recreational use of marijuana.

On a lighter side of the discussion, Holcomb talked about his dog Henry.

“He is just a media hound,” he added. “And is more popular than me having Facebook, Instagram, and all those social media sites with more likes than me.”

Holcomb has taken free-throw shots across all 92 counties in barns, outside of barns as well as on many basketball courts across Indiana.

“God is Good,” Morris said after receiving the award. “He placed me in this beautiful country. If you get the chance to volunteer – Do it.”