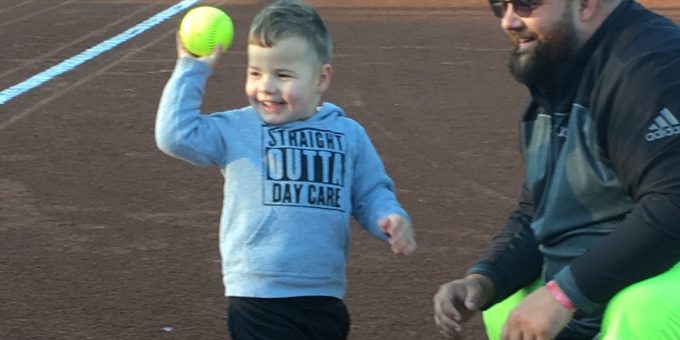 (BEDFORD) – Mason Lewis was all smiles and energetic Saturday morning, at Murray Forest Park Riley’s Children Hospital Tournament. Mason was chosen to throw the first pitch at the tournament.

At three months of age around June 16th, 2016 Mason Lewis had a cold. While at the doctor’s office the pediatrician felt a ridge on Mason’s skull. Mason was sent to Bloomington for further testing. He was then referred to Riley’s with a diagnosis of Sagittal Craniosynostosis.

Sagittal Craniosynostosis is a condition in which bones in an infants skull grow together too early, causing problems with brain growth and head shape. If left untreated, it can lead to serious complications, including head deformity, which can cause severe to permanent damage. It can also cause increased pressure on the brain.

Mason underwent surgery to treat the problem at Riley’s Children’s Hospital in Indianapolis. Mason’s mother Brittany was also a Riley Kid. She had a heart issue at a young age.

“Riley Hospital has a competent staff and is where I would want my child to go for medical treatment. They have always been available to answer my questions when needed,” she added.

“I stayed in Mason’s room the whole time following his surgery. However, Ronald Mcdonald’s House provides a place for parents and family to stay while their child is being treated. They have a section where the children can play video games and other activities to keep them occupied while they stay at Riley.” Lewis added.

As far as Mason’s condition, they will have to wait a little longer to see whether he will need additional surgery. He is still growing and still has a soft spot on his head that will need to be monitored. He sees his doctor every six months to monitor his progress.

Mason took to the field Saturday morning to a crowd of onlookers and well-wishers. Mason is now three years of age and shined before a community who supports this inspiring young man. His parents are Tyler and Brittany Lewis. He has two siblings, Gavin Lemons and Gage Lewis.

According to Gary Dorsett, Recreation Director of the Bedford Parks Department , a total of 12 men’s teams and 3 women’s teams competed in the tournament. Gillespie’s 1st Place Trophies was this year’s sponsor of the event.

“This was a beautiful day to have the event. And the event goes to a very good cause. The Bedford Softball Association loves supporting the Riley’s Children Hospital,” Dorsett said.