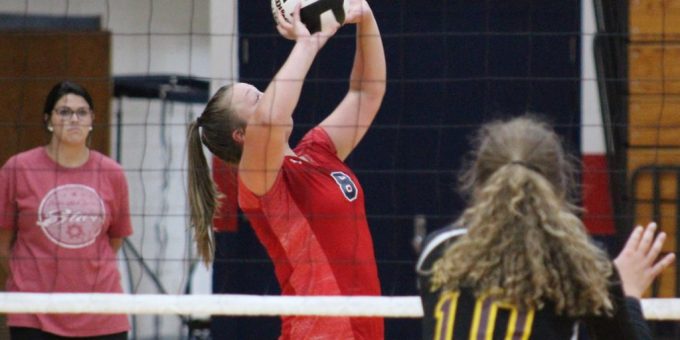 (BEDFORD) – Little by little, at times by agonizing inches, progress is made. Set to set, match to match, Bedford North Lawrence is clawing forward, moving closer to that first victory.

Near enough to sense it, hungry enough to taste it. But the finish line is still elusive, and it’s not supposed to be a mobile target. Perhaps another day, perhaps the next day . . .

BNL cobbled together its best effort thus far, against the best competition thus far, and fell short on Saturday afternoon, suffering a 26-24, 21-25, 25-17, 25-16 loss to Bloomington North. The Stars (0-3) have now lost 21 of their last 22 matches, dating back to last season, so a reward for effort (and patience) is needed. Somebody soon is going to pay when BNL explodes and ends the frustration.

The Cougars (1-2) refused to be that victim, winning the swing points in the first set and yanking momentum back to their court during the final two.

BNL would like to bottle the first two sets, and duplicating that successful surge is possible. That could lead to something.

“It’s better, definitely better,” BNL coach Jordan Robbins said. “We had way more of those good spurts. The hustle was there, more so than it’s ever been.

“Our consistency is getting better, but we don’t have it all in the aspects we need. Mental toughness is something we struggle with, and that got us today with the little errors. It’s frustrating when you see that awesome glimmer and then we just drop.”

North did not expect a door mat to wipe feet on when entering BNL Fieldhouse, and the Stars were far from that. The Cougars had to fend off some fierceness, especially after BNL’s late blast in Set 2.

“We looked a little anxious when things got tight early,” North coach Disney Bronnenberg said. “We started to take care of things. It was nice to see how the girls responded.”

When North was in trouble, it went to sophomore outside hitter Kyla Kante, whose net power was a key factor. The Stars tried to limit her touches with service aggression, and that worked as Annie Waggoner, Carlee Kern and Merritt Callahan were a combined 45 of 45 from the line for 32 points.

“They couldn’t handle our serves, and that was something we were consistent with,” Robbins said. “We kind of put their offense on their heels. But we have to have a block.”

Kante, the daughter of former North basketball star Djibril Kante, had 19 kills. Grace Fisher had 35 assists and 7 digs, Taylor Storm totaled 22 digs, 11 kills and 4 aces, and Abbie Staggs had 9 kills for the Cougars.

“It’s progress and you can’t be upset with that,” Robbins said. “We’ll have to be ready to go on the fly.”

So off they go, into the wild yonder, blue from breathholding for that first win. BNL will visit Edgewood on Monday.