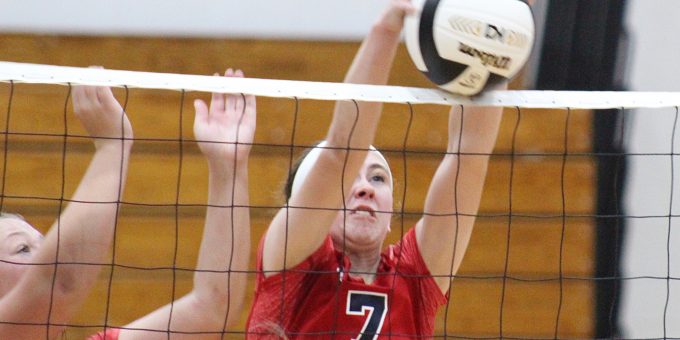 BEDFORD – Down a set, not the best way to start a season opener, Brown County tinkered with its rotations. From that point, the Eagles soared and Bedford North Lawrence was floored.

Brown County rallied from its shaky start, stole the key third set with a late run, and conquered the Stars 15-25, 25-14, 25-22, 25-16 on Thursday night. Senior hitter Chloe Lee powered the Eagles to a comeback win in their opener, while BNL (0-2) couldn’t keep a grip on a winnable match.

The pivot point was the third set. BNL owned a 22-18 edge at that crucial stage, on the verge of taking a huge step toward a huge jolt of confidence. But the Eagles, after a timeout to discuss the situation, scored 7 straight points and flew away.

“Runs like five to seven points can’t happen in a game like this and momentum swings kill us,” BNL coach Jordan Robbins said. “When we get down, we don’t know how to recover, or if we do it’s too late.”

BNL clutched the early momentum, putting together its best moments as Carlee Kern, Merritt Callahan and Annie Waggoner sparked the surge. But Brown County’s lineup adjustment produced immediate dividends with a 10-2 start to the second set.

“That changed our chemistry,” BC coach Jessica Robertson said.

The Stars briefly recovered their swagger, battling from a 7-3 deficit in Set 3 to power in front and push to the brink of taking a key set. That didn’t happen. BC came back from the one-minute play stoppage with a five-minute blast that turned everything to its side.

“It’s mainly keeping them focused,” Robertson said. “We want to worry about what we’re doing on offense, rather than paying attention to what they’re doing on the other side. That timeout was about doing all the little things right.”

The big thing BC did right was feed Lee, who hammered down 16 kills.

“They have a great hitter, they went to her every single time, and why wouldn’t you?” Robbins said. “She made our defense rearrange. We had to make some adjustments.”

“Progress,” Robbins said. “There were a lot of good spurts, but we have to withhold those spurts, build their confidence. Mental mistakes kills us. Overall it was better, we have a lot of work still to work on.

“We need to find a big hitter. Somebody has to do it. We need it to come sooner than later.”

BNL will host Bloomington North on Saturday at 3 p.m.