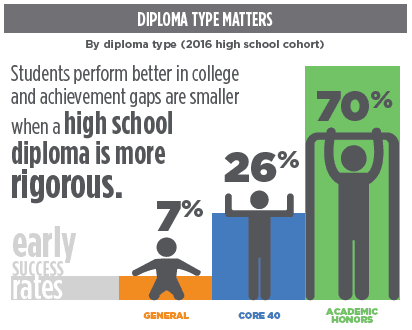 (INDIANAPOLIS) – Students in 21st Century Scholars, Indiana’s early college promise program, are leading the way in closing achievement gaps, and diploma type is a significant predictor of early college success, according to a new report from the Indiana Commission for Higher Education.

The Equity Report provides a snapshot of Indiana’s achievement gap progress by race/ethnicity, socioeconomic status, gender and geography. Progress in the Equity Report is measured by student college-going rate, early success in college and college completion.

“Hoosier students are increasingly diverse and economically challenged. We are moving nearer to closing achievement gaps, but it is critical to continue this positive momentum and ensure more Hoosier learners have access to the opportunity a quality degree or credential provides,” said Indiana Commissioner for Higher Education Teresa Lubbers.

Highlights of demographic changes shown in the Equity Report:

Race/ethnicity: Nearly 10,000 more students graduated high school in 2017 than in 2007; virtually all of the growth was among minority students.

The rate of all Hoosiers entering college within one year of graduating high school in 2017 was 63 percent, while students in the 21st Century Scholars program entered college at 86 percent – greater than any other population highlighted in the Equity Report.

Alternatively, less than 40 percent of low-income non-21st Century Scholars went to college within one year of graduating high school, a rate that has dropped by five percentage points in five years.

On-time completion rates for 21st Century Scholars has increased by substantial margins over a five-year period (up 14 and 12 percentage points at two- and four-year campuses, respectively).

Data from the Equity Report also show the 21st Century Scholars program could be a key in retaining Indiana’s talented college graduates: Scholars are the most likely group to stay in Indiana for college.

“Without a doubt, 21st Century Scholars are outpacing all populations of Indiana’s graduates in college-going rates. Additionally, Scholars are exceeding their low-income and minority peers in nearly every measure we consider in the Equity Report,” said Lubbers. “As we approach the 30th anniversary of the Scholars program, it must remain a priority for the state because this program is our key to closing the state’s achievement gaps.”

Not surprisingly, learners who attain the state’s most rigorous diploma – the Academic Honors Diploma – perform better in college than students with the Core 40 or General Diploma, according to the report.Early success in college is determined by students needing no remediation, completing all coursework attempted and persisting to the second year. While fewer students are entering college needing remediation, the most challenging for students is completing all coursework attempted in the first year of college.

There is a disparity among populations – particularly relating to race/ethnicity and socioeconomic status – of who earns which type of high school diploma and the rates of early success in college.

Achievement gaps are smaller when a high school diploma is more rigorous.

The gap grows between those populations when looking at Core 40 earners, but starker still is the gap among General Diploma earners: White students are twice as likely as Black students to experience early college success.

The diploma-related gaps also track along socioeconomic levels. Students from low-income households are less likely to earn the Academic Honors Diploma and less likely to experience early success in college. Nearly a quarter of low-income Hoosiers not in the 21st Century Scholars program earn the General Diploma.

“These gaps are unacceptable. Further alignment among Indiana’s K-12, postsecondary and workforce systems is crucial to closing these achievement gaps and necessary for the future of our state. Campuses need to innovate ways to support learners and reduce the disparity in who achieves success in college” said Lubbers.

“We must continue to challenge these gaps and work together to provide a successful path forward for all Hoosiers.”

The Indiana Commission for Higher Education is a 14-member public body created in 1971 to define the missions of Indiana’s colleges and universities, plan and coordinate the state’s postsecondary education system, and ensure that Indiana’s higher education system is aligned to meet the needs of students and the state. The Commission includes representatives from each Congressional district, three at-large members, a college faculty representative and a college student representative. Learn more about the Commission’s Reaching Higher, Delivering Value strategic plan at www.in.gov/che/.