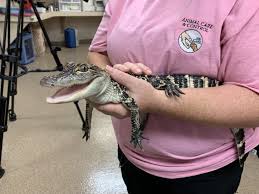 (FORT WAYNE) — A northeastern Indiana police officer sent to investigate squatters who had taken over an abandoned apartment found an alligator lurking inside instead.

The Fort Wayne Police Department says the officer discovered the young reptile Tuesday in a closet while he was looking through the apartment.

Department spokeswoman Sofia Rosales-Scatena tells The Journal Gazette that the alligator “was a baby, for sure.”

The reptile was placed into the custody of Fort Wayne Animal Care & Control.

Fort Wayne police posted a tongue-in-cheek statement on its Facebook page calling the gator a “beast” and saying that there were “tense moments until animal control arrived to take the creature away.”