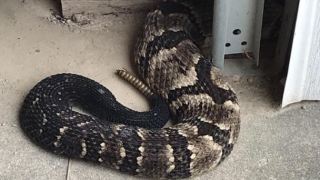 (JACKSON CO.) – A Jackson County man called for help after he found a large Timber rattlesnake in his garage.

Indiana Department of Natural Resources Conservation Jim Schreck says Officers Blake Everhart and Lt. Phil Schuetter, responded to the Seymour man’s request to help deal with a snake found in the garage. While dealing with that snake they found two more Timber rattlesnakes nearby.

According to Officer Schreck, the snakes were relocated.

No one – including the snakes – were injured.

According to DNR Timber Rattlesnakes are one of only four venomous snakes in the state.

Timber Rattlesnakes are generally found in south-central Indiana and are often confused with the eastern Hognose, Gray Ratsnake, and Bullsnake.