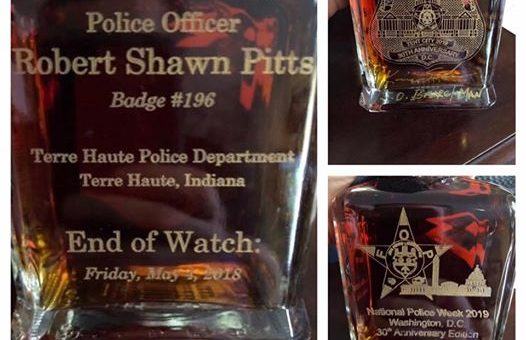 FOX59 News reports, the brother of Rob Pitts shared photos of the special bottle this week. Indiana Going Blue posted about it on Facebook.

The special edition bottle of Jack Daniel’s Tennessee Whiskey is engraved with Officer Pitts’ name, badge number, and end of watch. It also commemorates National Police Week 2019, an event during which Pitts was honored.

“For a company such as this to do something like this, I have no words,” wrote Greg Pitts, the late officer’s brother. “Jack Daniel’s dedicated eight men to work on this bottle. I was fortunate enough to be able to meet Kevin Sanders, himself…the Jack Daniel’s barrel man. The guy that put his final approval on this bottle.”

Pitts wrote that he gave Sanders a challenge coin and bracelet with this brother’s name on it as a thank you.

“I cannot begin to explain how much this means to me,” he wrote.

Pitts’ family received a letter of support from President Donald Trump after his death.