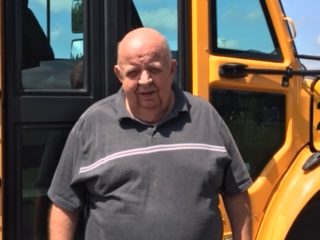 (MITCHELL) – This year will make Bill Luttrell’s 50th year as serving the Mitchell School Community Schools System. With the last eleven of those years as Transportation Director.

Bill has been married to his wife Mariane for 53 years, and the have two grown children Billy and Kathy and four grandchildren. Bill is a member of the Bride of Christ Church in Mitchell serving as a deacon of the church.

“I have no plans of retiring. A State Police trooper asked me how long I have been doing this, and he was shocked,” said Luttrell. “I seen a little girl get on the bus one time, I thought she looked awfully familiar, and I hauled her grandmother to school. So I have been doing this a while.”

Looking back on his career, he has made a lot of friends.

There have been a lot of changes over the years in busing students.

“We have helped other transportation departments solve issues and worked out problems that they were experiencing,” he added. “We all network and help one another out.”

The buses themselves have got expensive.

This has led to the reduction of contract bus routes. The contractor bus drivers can no longer afford to purchase buses, on what corporations pay for the bus routes.

Mitchell Community Schools have a total of 29 bus routes with 7 of those routes contract routes.

“We normally purchase one bus a year,” he added. “We may have to change that shortly as contract routes become obsolete. We use to be able to run a bus for about 20 years, but that has changed a little bit with buses lasting now approximately ten years.”

After the Carrolton bus crash in Kentucky, insurance on school buses soared. Luttrell said the accident did not have anything to do with the safety of the school bus. It was caused by a drunk driver. However, insurance companies now charge school corporations more to operate.

“When you see the miles traveled every year, and the number of accidents it is safe,” Luttrell said. “I come from the theory if it is not broke do not fix it. So, I do not believe school buses need seat belts. With even a bus monitor on board, I do not think that we could get all the kids off in a fire being seat belted in. We practice fire drills every year, on the buses.”

More recently, the state has been concerned with vehicles passing the stop arms.

Luttrell says around here, it is not that big of a problem. However, it only takes one time for a motorist to pass the stop arm and injure a child.

This year, lawmakers made changes and bus drivers are not allowed to pick-up children who now have to cross the street. This added a little bit of time added to each bus route. The change has affected U.S. 50 West, State Road 37, and State Road 60 routes, and caused a few parents to get upset.

Parenting has changed too, which sometimes makes driving a bus challenge. Luttrell says when a child acted up in the past, the parents themselves took care of the issue. Now, they blame the bus drivers for the issues. If children would just sit down on the bus and be quiet, there would not be an issue. But, Luttrell says now they claim the bus driver is picking on their child. Luttrell says bus drivers do not have time to pick on children, they are concerned with getting the children home or to school safe and keeping order on the bus so no one gets hurt.

Luttrell son, Billy, also works for the school system working on the school buses. He has been working on buses every since he was a small child. Replacing part on buses has also increased in price.

“All the buses have passed inspection this year, and we make sure your child remains safe while in our care,” said Luttrell. “ I hope I have made an impact on these students lives over the years. I have enjoyed my time so far,” Luttrell concluded.