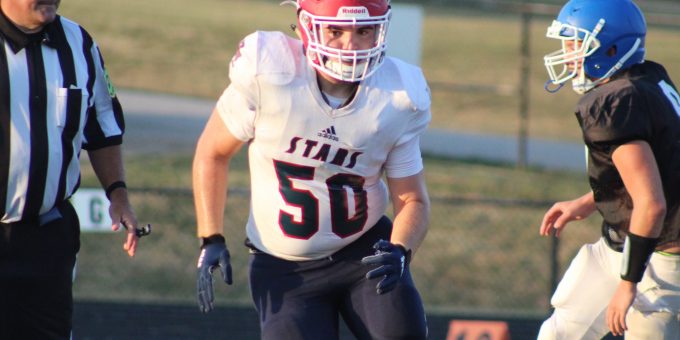 (BEDFORD) – Ready or not, and some eyebrows of concern were raised after Bedford North Lawrence’s public debut, the curtain will be raised on the 2019 high school football campaign Friday night.

The lights, the thrills, the tenacity, the thunder of pads, Bob Lovell’s popular post-game radio verbiage from all corners of the state – it’s the traditions of the grand game, with everyone equal on Week 1. The excitement level reaches a crescendo.

For the Stars, it’s an opener of historic opportunity. BNL will visit Martinsville, seeking its first road win in a series that dates back to the program’s infancy. BNL has conquered Martinsville only three times, the last in 1992.

Granted, the series was dormant from 1998 until last season, when the Artesians pounded the Stars 45-21. Martinsville’s dominance is one of the few things that hasn’t changed in 20 years.

That was then. This is now. But it’s still a challenge, especially for a team that’s got questions yet unanswered as the opener arrives in unforgiving manner.

BNL was not impressive last week, more concerned with identifying depth than scoring style points, in the controlled scrimmage against Mitchell. This counts much more. For BNL coach Steve Weber, starting his seventh season at the helm, this is a major test, the first step on the road to the Class 5A postseason.

“We want to compete, and we’d like to win,” Weber said. “But the big thing is we have to get better. Whatever we do, we have to be decidedly better at the end of this game. For me, the goal is having the right kids, in the right spots, playing the best ball in Week 10. We’ve got nine weeks to get there.”

BNL must be decidedly better, both in reference to last year (Martinsville exploded to a 38-7 lead at halftime) and last week (Mitchell was obviously more prepared). Nothing can be done about the distant past, but the Stars can do something about the most recent performance.

“It motivated a lot of us,” BNL running back Skyler Bates said. “We have to be ready. It will be tough.”

“It served as a wake-up call,” senior linebacker Jacob Hobbs said. “All the seniors forced the young kids to step up at practice.”

BNL should be more consistent and symmetrical with the first units on the field at all times. That means new quarterback Dalton Nikirk will be running the attack with Bates and Justice Woods as primary options. It means the offensive line, with center Reagan Bowman out for the season following preseason knee injury, must adjust quickly. It means the defense, riddled for over 30 points per game last season, must be meaner, stingier, nastier.

Martinsville, if its scrimmage clash with power Columbus East is any indication, is already there. The Artesians allowed only one touchdown in the clash with the Olympians. Martinsville coach Carter Whitson, a former staff member at Indiana University, authored an immediate turnaround from two seasons of 1-19 when he took over, and this team could continue that positive trend.

New quarterback Xavier Tunitis was 7 of 9 passing for 116 yards and two touchdowns in the short time frame against East, while running back Tyler Cox added 46 yards rushing and a score. East managed only 58 yards rushing and coughed up two fumbles.

“They’re aggressive,” Weber said. “They’re not flashy. They’re not going to confuse you, but they’re good at what they do. They defend well. If they’re getting penetration, it will kill us offensively.

“The main challenge is playing four quarters of speed-up ball. They’re going to up-tempo us, and that hurt us last year. The key is controlling the ball, get some first downs and slow the game down.”

BNL never had the chance to dictate anything during last year’s battle. Martinsville pounded out 392 total yards, picked off two passes, and didn’t allow anything of consequence until Bates scored two late TDs.

What to expect from the Stars? Power running with Bates, perhaps some offensive line shuffling, key people playing both ways and a lot of snaps. Weber was looking for depth during the scrimmage and didn’t find any. So a few good men will be asked to cover a lot of ground.

“We’ve had good practices,” Weber said. “They’re out there slugging away. But we have a lot of ground to make up.”

Last meeting: Last year at BNL, the Artesians blasted to a 38-7 halftime lead and slammed the Stars 45-21. Martinsville’s Isaac Osborne had 86 yards rushing while quarterback Travis Griffey ran for two touchdowns and threw for another. Skyler Bates had 79 yards rushing and two TDs for BNL.

Game notes: Whitson is a former member of the Indiana University coaching staff. He played college football under Kevin Wilson at Oklahoma. Martinsville went 1-19 the two previous seasons before Whitson’s arrival. BNL’s last win in the series came in 1992.