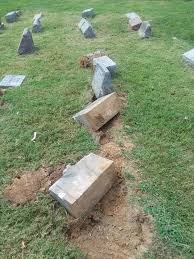 (EVANSVILLE) — Police say grave markers were knocked down when a woman allowed a 9-year-old girl to sit on her lap and drive a car in an Indiana cemetery.

The Evansville Courier and Press reports that a 48-year-old Chandler resident is facing charges of criminal mischief and neglect of a dependent for the Monday night incident at Locust Hill Cemetery in Evansville.

Police say a Toyota Corolla was off the road and on top of grave markers when officers arrived. That area of the cemetery is for deceased children.

Police say the woman told officers that the child hit the gas pedal instead of the brake. The child’s father was a passenger in the car.