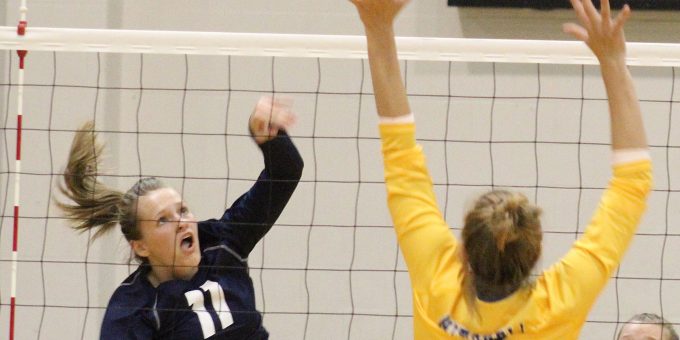 MITCHELL – No question, among the 397 career wins Scott Saunders has recorded during his volleyball career, the two wins over the program he devoted 20 years into building have to rank in the top 10.

While last year’s triumphant return to Bedford North Lawrence was the emotional zenith, winning the rematch was almost as satisfying, just as important.

Mitchell stormed through the first two sets and rallied in the fourth for a 25-17, 25-15, 16-25, 25-20 victory over the Stars in Tuesday night’s season opener, a county rival battle between two young teams. Early nerves betrayed BNL, and a late surge saved the Bluejackets from another five-set showdown.

Saunders, in his second season with the Bluejackets, is surrounded by BNL reminders. Three members of his coaching staff, for example. His friendships with his former team remain intact. But that doesn’t mean winning isn’t foremost on his mind.

“It was still emotional,” Saunders said. “It’s a county rival. I want BNL to do well. I give 20 years to that, and I want them to be successful. I just didn’t want it to be tonight.”

For the Stars, with no seniors to set the example, the strain was more than they could bear. Mitchell’s point streaks punctuated the first two sets, and a final flurry closed out the win. The Bluejackets went on a 9-point run in the opening set, posted 10 straight points in the second, and erased a 7-2 deficit in the fourth.

“Our defense in the first two sets was really good,” Saunders said. “We were moving, we were making it tough on them to get a ball put away.

“That third game is always the hardest to win. You get a little bit complacent, you think they’ll just give it to you, and they ratchet it up a notch. Then Game 4 started, it was ‘Here we go again.’”

Here we go again? That would have foreshadowed a BNL blast like last year’s epic, when the Stars dropped the first two sets and forced the fifth-set runoff. That repeat scenario appeared possible until Saunders took a timeout early in Set 4, scripted a run to get even, and watched his team roar in front and pull away.

“I really liked how we regrouped,” he said.

BNL’s highlight was certainly the third set. The Stars crackled to a 5-1 lead, extended that to 13-5, and never relaxed.

“That is how we play in practice, how we competed all summer,” BNL coach Jordan Robbins said. “Why did we wait so long to get it out? But that’s how we know we can play. It’s keeping that style all the way through.”

Kelsey Robertson paced the Mitchell attack with 13 kills and 3 aces, Maddie Lynch totaled 29 assists, Mattie Leamer added 10 kills and 17 digs, and Sierra Cox contributed 14 digs for Mitchell, which beat BNL in back-to-back clashes after winning only once in the previous 14.

“We were definitely very nervous, trying to work those first-game kinks out. Our kids are young, but we’re not going to play that card. You have to move past it and do it.”

Both teams will be in bounce-back mode on Thursday, Mitchell looking for another burst of emotion when it collides with Paoli, while BNL will make its home debut with Brown County.