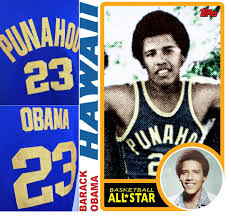 Obama wore the jersey during his senior year at Punahou School in Honolulu as a member of the 1979 Hawaii State Champion boys’ varsity basketball team.

Obama is a well-known hoops fan, and he was known to host pickup games while in office. He’s sat courtside at a number of NBA games, and he was even in attendance when Duke University phenom Zion Williamson’s shoe burst during a game against the University of North Carolina in February.

The jersey might have been discarded if not for fellow Punahou alum Peter Noble. Noble was three years Obama’s junior and wore the same No. 23 as a member of the junior varsity team.

Noble did not realize that the jersey belonged to Obama until the latter was elected President and he saw in a Sports Illustrated article that he had worn 23.

Included in the lot is a letter of provenance from Noble and his 1979 Punahou School yearbook. A portion of the proceeds will go to the school.

Eric Bradley, a spokesman for Heritage Auctions, said bidding was extremely competitive, with the lot receiving 27 bids, far above the seven or eight bids most lots receive.

The jersey’s price bested the winning bid for a dual signed photograph of baseball legends Ty Cobb and Babe Ruth, the only one of its kind known to exist. That lot sold for $111,000, and the auction house had expected it to be the top bid in the auction.