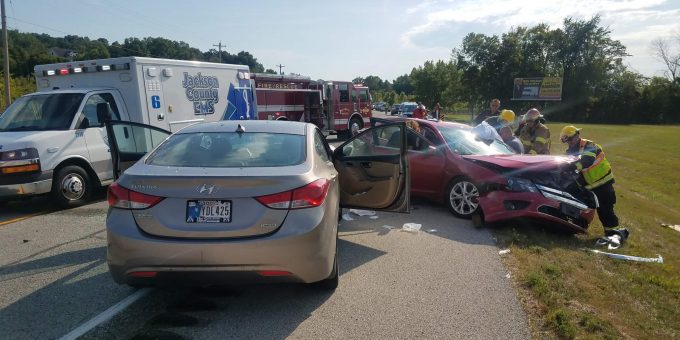 (BROWNSTOWN ) – Three people were injured in a three-vehicle accident on Saturday.

Officers had been searching for a reported red passenger car that had crossed the center line. While looking for the red vehicle, a 911 call came in reporting the accident.

Jackson County Sheriff’s Department Deputy Clint Burcham and Brownstown Officer Sam Hughes were the first to arrive on the scene.

Upon arrival, there was a red Ford Fusion with damage sitting on the shoulder on the northside of the roadway facing west.

A gold Hyundai Elantra with damage was in the westbound lane facing west.

Police also discovered a silver Ford Flex sitting west of the two other vehicles. It had damage on the driver’s side.

Police say 18-year-old Timothy Magill, of Bedford, was in the driver’s seat of the red Ford Fusion. He had to be freed from the vehicle by fire department personal. Magill was flown by Stat Flight to the University of Louisville Hospital for treatment.

Police say 30-year-old Meghan Dunham, of Brownstown, was the driver of the silver Ford Flex. She later went to Schneck Medical Center for treatment. She refused treatment at the scene.

Eastbound and westbound lanes of US 50 were shut down for approximately 2 hours while officers investigated the crash and the wreckage was removed from the roadway.