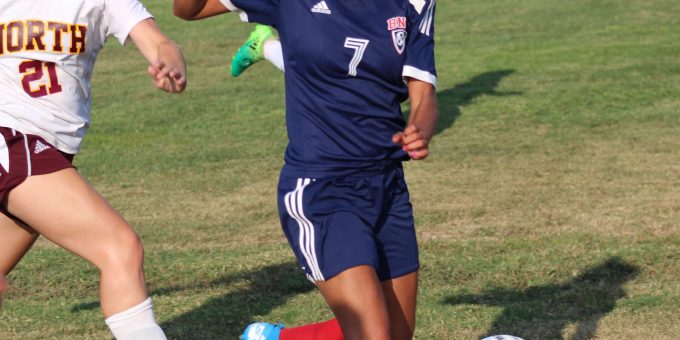 (BEDFORD) – The heat was on, whether it was the triple-digit index or the barrage of shots that created a blast furnace effect on Bedford North Lawrence’s overwhelmed defense.

Bloomington North peppered away at BNL’s goal and salted away a victory in the season opener, powered by Lucy Clarke’s two first-half goals to a 6-1 victory on Monday afternoon.

BNL senior speedster Jennifer Ramirez broke through late, but the Cougars were far more comfortable in the withering, searing conditions. The Stars couldn’t stand the heat and couldn’t keep North out of the scoring kitchen.

North (1-0-0) had a whopping 16-2 advantage in shots and converted BNL mistakes – an own goal, soft defensive clears of loose balls in the zone, a penalty kick – into scores.

“We’ve got a nice mix of girls that have played before, and new girls,” BNL coach D.J. West said. “Our new girls showed a little bit today, they were a little lost, not used to the varsity game speed. It’s a little quicker than they’re used to playing. Hopefully they realized that.”

The Cougars took a 1-0 lead when the Stars surrendered an own goal off a corner kick at 24:21 in the first half. With the heat guidelines requiring a water break at the midpoint of each half, North struck most often after getting replenished. What were the Cougars drinking, anyway?

Gulp! Clarke rifled in a rebound off Hannah Riester’s diving save at 16:35. Swish! Clarke took a looping pass from Clara Brekke and dumped home her second goal at 13:31.

In the second half, the Cougars pounced quickly after the second stoppage for hydration. Ramona Volpp gathered a loose ball at close range and snapped a shot into the left corner of the net at 17:27, and Erica Goldsworthy converted a penalty kick at 14:55.

Sarah Goldsworthy capped North’s scoring with another free-ball win in front of the BNL net at 9:11.

“Just work off the defensive mistakes,” North coach David Prall said. “We were pretty aggressive pushing forward. They’ve been playing well together so I was happy with how it turned out.”

The Stars (0-1-0) finally scored with 5:44 remaining as Ramirez, who was constantly chased with double-team respect, ripped home a free kick from 30 yards out on the right wing.

“She’s been a great player,” Prall said. “She’s really quick and has a great shot. We knew that was their main threat.”

BNL struggled to generate any consistent attack as North won most of the midfield battles for possession.

“We did some things the scoreboard doesn’t show,” West said. “We did some good things. We had some breakdowns after we got tired. It was small errors, stuff we need to do better, like getting the ball out.

“There’s no excuses. That’s why it’s good for us. We’re basically working ourselves into shape.”