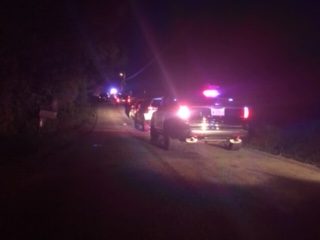 (SPRINGVILLE) – Lawrence County Sheriff Mike Branham confirmed that a Springville man was shot and killed after he approached officer armed with a long gun.

Sheriff deputies responded to 271 Greer Lane at 8:29 p.m. Saturday after receiving a 911 call reporting 62-year-old Mke Parsley was in the roadway yelling profanities and threatening to harm the caller.

The caller told the dispatcher that Parsley was armed and had fired several shots.

When they arrived they found Parsley near a camper located on the property. Officials says that Parsley was living in the camper.

Officers saw Parsley reach for something and determined it was a long gun. Officers took cover behind trees and repeatedly ordered Parsley to drop the weapon.

Parsley continued walking toward police, raised the weapon, pointing it at them.

Officers continued to order Parsley to drop the weapon and he ignored those orders. One of the deputies had a clear view of Parsley and fired his service weapon to stop Parsley from approaching. The name of that deputy is not being released at this time.

The Lawrence County coroner and prosecutor were called to the scene.

Sheriff Branham also requested that Indiana State Police to conduct an independent investigation of the incident. Body camera and dashboard camera footage were recovered for use in the investigation and is being withheld from the public pending the investigation’s completion.

Branham says both officers at the scene have been placed on administrative leave consistent with department policy.

Sheriff Branham says no additional statements will be released until completion of the investigation.