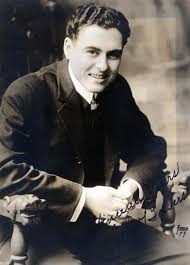 (GARRETT) — An Indiana native who became one of Hollywood’s top silent movie actors will be honored with a historical marker in his hometown.

The marker, recently approved by the Indiana Historical Bureau, will be installed next year for John Bowersox in the DeKalb County city of Garrett.

Bowersox was born and raised in the northeastern Indiana city. He enjoyed a successful stage career before starring in more than 90 Hollywood movies under the stage name John Bowers.

His wife, Maurgerite de la Motte, was also a star, but they were separated when Bowersox died in 1936 following a career slump.

DeKalb County historian John Bry tells The (Auburn) Star Bowersox’s sad ending is believed to have been an inspiration for the main character in the original “A Star is Born” film.