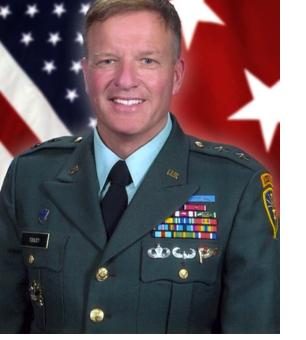 “With a strong military presence and network of defense assets, combined with the tactical advantage of our state’s pro-growth business climate, Indiana is perfectly positioned to be at the center of global advancements and growth in defense,” Gov. Holcomb said. “Today’s announcement is another signal to the world that Indiana is open for business, offering a single voice and shared a vision of propelling long-term economic growth and job creation in the defense industry.”

In his new role as president of defense development, Tooley will provide a focused approach to grow Indiana’s defense industry by promoting the state’s defense assets, assisting in business development, and attracting and supporting defense-related industry partnerships and activities under the direction of Indiana Secretary of Commerce Jim Schellinger. As part of these efforts, all defense-focused resources and programs, including the Indiana Procurement Technical Assistance Center (PTAC), will be coordinated by Tooley. Tooley will also coordinate directly with industry stakeholders like the Commanders Roundtable, Indiana Defense Task Force and Indiana Chapter of the National Defense Industrial Association.

“It’s an honor and privilege to continue serving the people of Indiana and our great nation,” Tooley said. “Under the leadership of Gov. Holcomb and the IEDC, I look forward to supporting our state’s critical security assets, building on Indiana’s defense development efforts, and collaborating with industry, government and academic partners to drive growth and increase our competitiveness in the defense sector.”

Tooley, of Bargersville, will leave his current roles as chief executive officer and board chairman of the National Center for Complex Operations in order to transition to the new position. Prior to joining the private sector in 2016, Tooley served as Assistant Adjutant General – Army of the Indiana National Guard, where he was responsible for the development of the Atterbury-Muscatatuck Center for Complex Operations. During his 41 years of military service, Tooley served in several staff and leadership roles during peacetime, combat and domestic emergency situations, including tours with the 101st Airborne Division, 82nd Airborne Division, 10th Mountain Division, 38th Infantry Division, Institute for Military Assistance and the Indiana National Guard.

Tooley holds a Bachelor of Arts in Social Studies from Western Kentucky University and Master of Science in Adult and Continuing Education from the University of Southern California. Tooley and his wife, Connie, have three sons and eight grandchildren. To honor his distinguished military service, Tooley was also awarded the Sagamore of the Wabash and Distinguished Hoosier awards by the state.

“In Indiana, we have a rich tradition of developing safe, reliable and innovative products that support our nation’s military,” Secretary Schellinger said. “With the addition of Major General Tooley, the IEDC will strengthen its efforts to target industry growth in the defense sector and attract new businesses to Indiana, adding to a growing list of companies that are finding success here. We’re excited for the breadth of military, private sector and civic experience that he is bringing to our team and look forward to working together to grow Indiana’s defense development opportunities.”

Tooley will start at the IEDC on August 26.