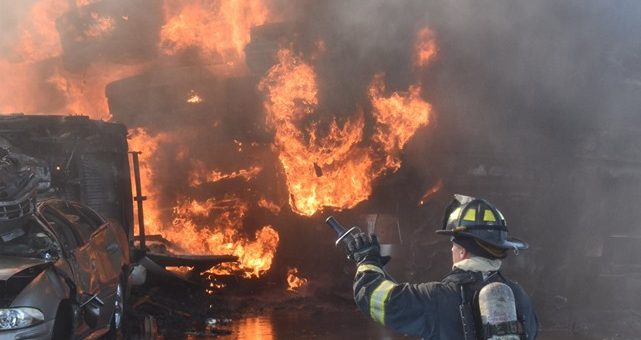 (INDIANAPOLIS) – A fire at a west side salvage yard spread to nearly 100 vehicles Friday evening.

The Indianapolis Fire Department says crews were dispatched to the scene at 2 Little Bees Auto Parts on South Tibbs Ave. shortly after 5 p.m.

Fifteen IFD units and seven units from the Wayne Township Fire Department working together got the fire under control just before 8 p.m.

Firefighters say the vehicles were stacked in two large piles of about 50 cars each. A forklift was used to remove the cars one by one so firefighters could put out the fire.

Battalion Chief Rob Aldrich estimates about 100 cars were involved and the there was approximately $20,000 worth of damage.

The Marion County Health Department was at the scene to assess possible runoff into Little Eagle Creek, but their assessment found nothing of concern.

Investigators have ruled the fire accidental. A customer using a drill to remove a car part threw sparks from the drill ignited nearby gasoline on the ground on fire. The man reported the fire to employees who then tried to put the fire out but were unsuccessful. When the fire got out of control, they called 911. The customer who started the fire left the scene before firefighters arrived.