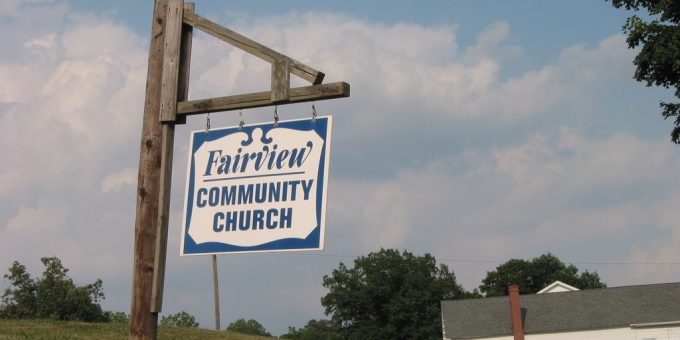 (BEDFORD) – Fairview Community Church is preparing to celebrate its 150th anniversary, and the commissioners passed a proclamation honoring their success.

The church will be hosting a homecoming service and pitch-in meal on Aug. 11 at the church at 417 Old US Highway 50 East.

The service will begin at 10:25 a.m. and the meal will follow the service.

Those attending the meal are requested to bring a side dish or dessert to share. Meat, bread, and drinks will be provided.

History of the Church

Late in 1869, Jonathan T. Hobson, a teacher at Fairview School, saw the need for a church in the area. Rev. Jacob White, the pastor of the Freetown United Brethren Church in Jackson County, was contacted and he arranged the first series of meetings at the school building.

The first service was held on Christmas Eve in 1869. There were morning and evening services on Christmas Day and an all-day meeting on Dec. 26.

The church, then known as the Fairview United Brethren Church, was founded on Dec. 29. There were 26 founding members.

Nearly two years later, the church building was completed and was dedicated on Nov. 24, 1872. It was the first United Brethren Church in Lawrence County.

John and Jane Hobson had six sons and four daughters, all of whom are buried in Fairview Cemetery. Five of the sons became United Brethren ministers, and all preached at the church.

More ground was added in 1914 for additional cemetery space.

In 1928, the school was abandoned and purchased by John D. Hobson. He deeded the building and ground to the church. The building was used as a church annex.

The church was remodeled in 1942, which included the addition of electricity. A new Sunday school room was added in 1956.

The church withdrew from the UMC in 1969 and became known as Fairview Community Church.

The old schoolhouse was remodeled and continued to be use as an annex. Two more Sunday school rooms as well as a basement were added in 1972. The basement included a furnace, restrooms and four additional classrooms.

A new sanctuary was constructed and was dedicated in early 2004. The first service in the new building was Feb. 22, 2004.

The most recent improvements at the church came in 2013-14. The last remaining portion of the old building was torn down, and a new addition was built to replace it. It was completed in April of 2014 and was ready for use on Easter Sunday in 2014. The addition was dedicated on May 18, 2014.