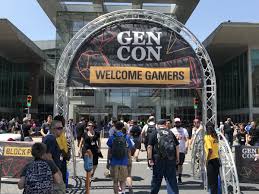 Gen Con President David Hoppe announced the attendance Monday. He didn’t disclose the previous record but said attendance to the four-day gathering has doubled since it was first held in Indianapolis in 2003.

Hoppe said, “Each year we come to Indianapolis for Gen Con, the show feels bigger and better than the one before, and this year was no exception.”

Those faraway hotel bookings reflect a potential trouble spot the city is working to address. Two new hotels on Pan Am Plaza and a convention center expansion are scheduled to be complete by 2023, when GenCon’s current contract expires. Gahl says GenCon and other conventions are watching the progress of those projects to make sure they have the space they need. And he says rival cities are watching too, sending visitors’ bureau staff to this year’s convention to study the layout and make plans to woo the convention away.

Gahl says there’s plenty of room in Lucas Oil Stadium to handle GenCon’s continuing growth until the contract expires. He says VisitIndy and GenCon meet six times a year to discuss what logistical changes may be needed.

The convention is Indy’s biggest. It’s called Indianapolis home since 2003 after an 18-year run in Milwaukee. It’s doubled in size since then.