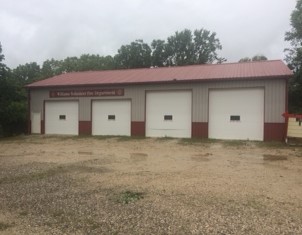 (WILLIAMS) – The Williams Volunteer Fire Department is one of Lawrence County’s oldest fire departments. It was formed back in 1961 and has helped other departments throughout the county get themselves established.

The Williams Volunteer Department is a debt-free organization. It owns all of its equipment and facilities located in Williams. The fire department used to operate out of a small cement block building but now houses its fire equipment in a larger more modern facility, just west of the Old Williams High School.

As stated several times throughout the meeting, “This meeting is not about money,” says Tony Lynch.

The department wanted to be able to address the question in so many minds of residents of ‘what is going on?’

Randall Wallace, President of the Williams Fire Department Board, explained how the department ended up being placed out of service by the Secretary of State of Indiana.

According to department officials, they did not receive the four letters sent out by the state requesting department action. Those letters were forwarded to another individual who is no longer associated with the department. Legally, every department must followup on these letters and send an entity report each year.

Once being notified of the Dissolution of Service Notification, the department filed the necessary paperwork and was quickly placed back into service, according to Wallace.

However, the department is still faced with the issue that many departments across the United States are dealing with. That issue is the lack of volunteer firefighters. If the Williams Fire Department firefighter shortage is not solved within a short time frame, then the Spice Valley Township Trustee may be forced to look at other options for fire coverage.

In 1961, the requirements to become a volunteer firefighter did not exist. Most departments signed an individual up, approved them, and they became a firefighter. The State of Indiana then issued a 24 hour training course before anyone could fight a fire sometime in the late 1980s.

Currently, the requirements for firefighting has increased from 40 to 120 hours of training to be able to fight fires as a volunteer firefighter.

“We must start standing up as a community with the demands they have placed on these departments. And with over-regulation they have created the situation where many can no longer put in the time required,” said Bill Spreen, a Williams resident who attended the meeting.

Spreen, who used to fight fires when those requirements did not exist, states he cannot put in the time that is now required.

More than 70 percent of America’s firefighters are volunteers. The smallest communities of 10,000 residents are almost always served by volunteer fire departments, according to the National Fire Protection Association.

The national average of calls departments respond to has tripled over in the last 30 years, according to the National Fire Protection Association.

“There is no force at the state level or a federal level, except the National Guard, that can provide a community with the rescue, mitigation, and recovery services like the fire and emergency services community,” says Dennis Onieal, acting U.S. Fire Administrator in an article published on June 29, 2017.

Volunteer fire departments once depended on local employers who offered full-time jobs with benefits to fire volunteers and were willing to have employees leave work to fight fires. Today, typical jobs have per-hour workers with unpredictable shifts for national or international companies that have no ties to the community.

The number of volunteer firefighters has declined 15 percent between its all-time high in 1984 and an all-time low in 2011. Over that same period, the number of calls has increased to more than 300 percent. Existing firefighters are suffering burnout and volunteers have the same training requirements as a paid career firefighter.

Volunteers must schedule their training around home life and work which is not an easy task.

David Pinnick, a Williams resident, was asked about paying volunteers a little money for runs. Those allocations would have to come out of the township trustee budget.

“People are just busy people now,” Spreen said. “I am part of other things and I do not have the time that is required to be put into the fire service. But, I also do not believe that it takes all this required fire training just to pull a fire hose, either. I know how to drive a truck, and I can pull a fire hose.”

Sarah Goff Hillenburg asked if you have to reside in the township to be a member. The answer is no. She then asked how many people reside in Williams that are on other fire departments – that answer was three to four people.

In the near future, many fire departments may be forced to merge with other departments to deal with the lack of available emergency personnel.

The future of the Williams Fire Department will be determined depending on if the department can recruit additional volunteers. If not, the Spice Valley Township Trustee will be forced to make some decisions.

In Mitcheltree Township, residents there may be faced with an even larger impact. Should the Williams Fire Department no longer be able to provide fire protection the closest departments are Shoals and Martin County Civil Defense which are about 10 miles away.

The Mitcheltree Township has contracted with the Williams Volunteer Fire Department since the late 1970s following some major fires in Pandaram Commune. There were also incidents of flooding when the Martin County fire departments could not reach Cale area north. This was the time when many sawmills and other businesses were going strong in that section of Martin County.

Roy Wadsworth from Martin County expressed those concerns during the meeting. According to Wadsworth, the Sheriff of Martin County stated that there would be no other out of county fire department to respond to Mitcheltree Township should Williams permanently dissolve.

When flooding is occuring, there is no way Shoals or Martin County Civil Defense could reach certain locations in the township. This is also a concern for Williams residents if the Huron Fire Department was the main provider for fire protection in Spice Valley Township. The department would not be able to reach several locations and this is the main purpose of relying on the Indian Creek Township organization from Fayetteville.

The fire department, along with the Spice Valley Township Trustee, will be making decisions shortly about fire protection in the Williams area. Asked if there was any kind of timeline when those decisions will be made, the president of the board replied “No.”