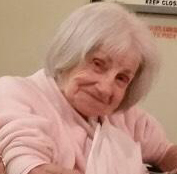 Frances (Ross) Fish died 11:16 A.M. at Stonebridge Health Campus on August 3, 2019 where she was a resident for over three years. She was born December 18, 1920 in Reed Station, near Oolitic. She was the daughter of John and Mary Rose (Demarc) Ross.

There will be no visitation hours. The Rosary will be prayed at 11:00 A.M. and a Mass of Christian Burial will be at 11:30 A.M. on Wednesday August 7, 2019 at St. Vincent de Paul Catholic Church with Deacon Dave Reising officiating. Burial will be at Green Hill Cemetery.

Memorial contributions may be made to the Bereavement Committee and St. Vincent de Paul School Fund.