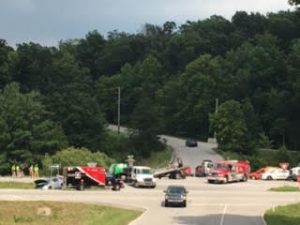 (BEDFORD) – Two people were injured in a collision at the intersection of State Road 37 and Washboard Road Tuesday afternoon.

According to a Lawrence County Sheriff’s Department report, 70-year-old Frances Peters of Bedford was traveling east on Washboard Road and attempted to cross State Road 37 in a 2019 Chevrolet Tracker.

Police say Peters was successful at crossing the southbound lanes of State Road 37. She then attempted to cross the northbound lanes and pulled into the path of a 2018 Chevrolet Express driving by 45-year-old Joseph Spurgeon, of Trafalgar.

Police say Spurgeon was traveling around 65 miles per hour when the collision happened.

Peters’ vehicle was struck in the driver’s side door and caused the vehicle to flip onto the passenger side.

Spurgeon’s vehicle spun around and then went into the median between the northbound and southbound lanes of State Road 37.

Peters complained of body pain and was transported by ambulance to IU Health Bloomington Hospital for treatment.

Spurgeon complained of shoulder, and upper arm pain was treated at the scene. He refused to be transported to a local hospital for treatment.