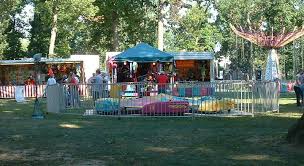 It starts today and runs through Saturday in Odon City Park on West Park Street.

The event is a production of the Odon Lions Club. It’s the 3rd year the Lions have sponsored the festival and the 134th year for the festival.

Paul’s style blends true country songwriting with blues, rock & roll, and pop to create a sound that is new and different while being recognizable and classic. He has been compared to a blending of Zac Brown, Tom Petty, John Mayer, and Bruce Springsteen.

Paul has had the opportunity to work with musicians from the bands of Reba McEntire, Brooks and Dunn, Faith Hill, Jewel, and The Wallflowers.

Paul and his band are currently working on a new album and are looking forward to sharing the new music soon!!

John grew up competitive in his hometown of Westfield, Indiana.  From sports and volunteering his time to those in need to performing the traditional Outlaw Country Music he loves, John has always been one to excel at everything he does.

He has been performing regularly on the World Famous “Broadway Strip” in Nashville.   John CO-Produced his first album “Outlaw Rising”.  His first single “Lonesome Old Guitar”  was released in the US and Canada on January 1, 2016.

Keeping with the tradition of a striving musician, John continues to take his show to venues in other states, almost every weekend.  Over the last 4 years, John has averaged over 250+ shows a year.  With around 70+ of those shows being weekends on the road in over 25 different states.  John has taken charge of booking his own shows and managing his own career.  Johns accomplishments have come from his own hard work.

In a short time John has also become a prolific songwriter having penned over half of his CD “Outlaw Rising” he is co-writing with songwriters Gary Gentry; “The Ride” (David Allen Coe, Tim McGraw), “We Didn’t See A Thing” (Ray Charles & George Jones), “1959,” (John Anderson), “Who Cares” (Ray Charles & Janie Frickie), “The Very Best Of Me” and “The One I Loved Back Then (The Corvette Song)” (George Jones), Wayd Battle, and SESAC Award Winner, Shawn Byrnes and others.

“The Justin Case Band in Bloomington, Indiana has been entertaining people since May 1988.

David Welch, the drummer and Rhonda Welch, the keyboard player, (brother and sister) had worked with Jerry Minger, lead guitar and banjo player in a previous band.  Jerry’s long time friend since elementary school (in Milan, Indiana of the famed movie, “Hoosiers”),Don Campbell, joined and the band came together.  All four of us sing lead vocals and the harmonies fall together effortlessly.”