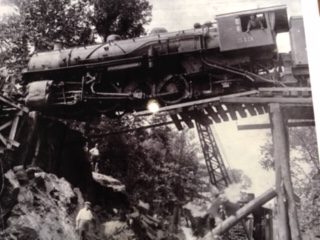 (BLOOMINGTON) – The Monroe County History Club presented the “History of the Monon” by George Carpenter on Tuesday afternoon.

The presentation was attended by more than 100 guests who listened to Carpenter’s historical account of one of Indiana’s well-known railroads that passed through Bedford and Bloomington.

During the Civil War, the Monon provided timely service to the Union Forces. The Monon carried volunteers to mustering centers and hurried sick, wounded or discharged men home at half-price.

In April 1865, a Monon Engine pulled President’s Lincoln funeral train at 5 miles per hour, per orders over the 90 miles from Lafayette to Michigan City.

From 1854 on, the Monon provided inestimable service to the limestone industry of Southern Indiana.

The Monon Railroad was the first Class “A” railroad to become fully dieselized.

The Monon operated entirely within the State of Indiana and was only a few files of out of state trackage rights which connected it to its two major terminals, Chicago and Louisville.

The Monon trackage crosses its namesake City of Monon in Northern Indiana. The mainline runs from Chicago to Monon to Louisville, while the lines from Monon to Michigan City and from Monon to Indianapolis were operated as branch lines.

Another branch line ran from Orleans, Indiana then Southwest, stopping on the grounds of the French Lick Springs Hotel, where it connected with the Southern Railway. The Monon also ran a branch line into the coalfields of Southern, Indiana at Wallace Junction.

The college traffic was so important that the Monon painted it’s passenger rolling stock the crimson and gray of Indiana University. It also painted it’s freight engines black and gold for the colors of Purdue University.

The Monon merged into the Louisville and Nashville Railroad in 1971, and some of the former Monon right of way is still operated by the CSX transportation.

Those in attendance of Tuesday’s presentation had some family members who worked with the Monon Railroad, or they themselves worked the Monon. People who attended were from different areas of the state including Paoli, Bedford, Muncie, and other places the Monon Railroad touched.

“There are many more topics we would like to cover. The Showers Building, History of Bloomington Hospital, and Bloomington Fire Department, and Police Department, to name a few,” said Mike Carter, current president of the organization.