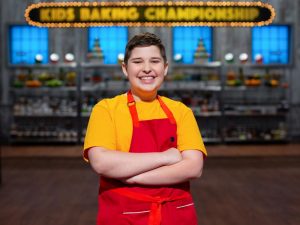 (WASHINGTON) – Trevin Alford of Washington is a competitor on Season 7 of the Kids Baking Championship.

Trevin runs his own bakery called T-Da Bakery and wants to be a pastry chef. He won a “future chefs” competition at his school. In his free time, he plays guitar, trombone, and plays golf. Trevin has a cotton candy machine at home.

Valerie Bertinelli and Duff Goldman return to test the skills of nine new talented young bakers, ranging in age from 10 to 13, in difficult dessert challenges to see who will measure up in the competition.

Only one will take the cake and the sweet grand prize of $25,000, a feature in Food Network Magazine, and the title of Kids Baking Champion.

“Viewers will be amazed by the baking abilities of this fresh batch of young bakers as they work through exciting new challenges featuring the latest dessert trends,” said Courtney White, President, Food Network. “Duff and Valerie add to the fun as they throw surprising curveballs, setting the bar even higher.”

Throughout the season, the kid contestants show off their skills and creativity as they whisk through new confectionary challenges, from hedgehog poke cakes, to intricate pie art, and to giant doughnut cakes. The classic imposter dessert challenge returns as well with a new surprising international twist, and the bakers will also have to tackle other delectable desserts including creative out-of-this-world cakes, sweets, and scrumptious snacks.

On the premiere, the bakers must use art as inspiration to create 2-layer splatter cakes – the brighter and crazier, the better. But that’s not all, each baker must choose a paint can to reveal what flavor their cake must be, such as chocolate chip, lemon, coconut, red velvet, and banana. The baker that crumbles under the pressure will be eliminated. On Monday, September 16th at 9 p.m. ET/PT, the championship concludes as one talented baker will rise to the top in the grand finale.