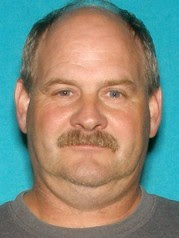 (BEDFORD) – The Silver alert issued for Kyle D. Bex was canceled at 1:28 p.m. at the request of the Lawrence County Sheriff’s Department.

Bex is a 48-year-old white male, 6 feet tall, 200 pounds, brown hair with blue eyes, last seen wearing a white t-shirt, brown pants and has a scar on top of his head.

Kyle is missing from Williams. He was last seen on Monday, July 29th at 7 p.m. He is believed to be in extreme danger and may require medical assistance.