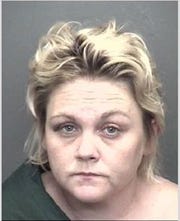 (EVANSVILLE) – A mother is in jail after police say she beat her kids and threatened to shoot a sheriff’s deputy.

When deputies arrived to the home of Heather Biehl, 41, they found two young girls — an eight-year-old and a 10-year-old. One of the children had bruising around the eye, and told police her mom punched her in the face and dragged her by the hair. She also had a cut on her knee and a bite mark. The other child also said she was pulled by the hair, and had bruises on her head, multiple bite marks, and a cut on her foot.

Deputies say Biehl was extremely drunk. When they interviewed her, she seemed unaware where her daughters were. During the arrest, she told one of the deputies she was going to shoot him with her AR-15 rifle.