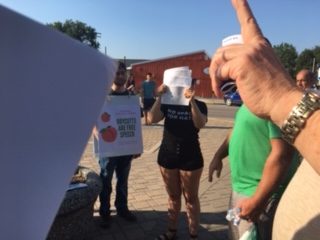 (BLOOMINGTON) – In response to growing concerns about safety at the Bloomington Community Farmers’ Market, the City of Bloomington has suspended the Market for the next two Saturdays.

The City of Bloomington deeply regrets the negative impact the decision to postpone the Market will have on Market vendors, many of whom have already endured a cold, wet spring that delayed planting and resulted in drowned crops.

Staff members are reaching out to vendors to assist with finding other selling options. Market customers who want to seek out their favorite vendors may use the Market’s online directory at bloomington.in.gov/farmersmarket to inquire about making direct purchases. The Tuesday Market will continue each week at West Sixth and Madison Streets from 4 to 7 p.m. through September 24, 2019.

The controversy surrounding the Farmers’ Market has grown to encompass issues much larger than the Market.  More information about the decision temporarily to suspend market operations will be available at https://bloomington.in.gov/news.

Mayor John Hamilton said, “The City certainly regrets the need for this decision, and we empathize with Market customers, and the farm and prepared food vendors for whom this loss of livelihood is a negative blow. But, in the end, we have to put a priority on the safety of all the people who are involved with our beloved Farmers’ Market.”

On Saturday at approximately 10:20 a.m., Bloomington Police Department officers were requested at the Bloomington Community Farmers’ Market regarding a protestor Cara Caddoo who was holding a sign and pacing in front of a vendor booth.

According to Captain Ryan Pedigo, responding officers were advised by staff from the Parks and Recreation Department, the City Department responsible for the Farmers’ Market, that they wished for officers to make contact with Caddo to reiterate their requests that she relocate to a designated area to protest.

As a matter of longstanding practice, pamphlets or displaying signage (aside from vendors’ promotional materials) is restricted from the vendors’ area, a guideline about which Parks officials repeatedly informed the protestor.

After denying repeated requests from BPD officers that she relocate, she was informed that if she failed to relocate, she would be placed under arrest on a charge of criminal trespass. The protestor again stated that she was not willing to move, so she was taken into custody.

Caddoo, who is an IU history professor was transported to the Monroe County Jail without further incident and remanded to the custody of jail staff for the charge of criminal trespass, a Class A misdemeanor.

Recent allegations about a vendor at our City’s farmers market having white-supremacist affiliations have alarmed and activated our community. Including me, personally and as Mayor. I join the vast majority of Bloomingtonians in abhorring and unequivocally condemning the odious doctrine of white supremacy. We know how important speaking out against hate is these days, with events and statements in our country and around the world seeming to open the door for hateful ideologies.

We know too that today’s progressive Bloomington has grown through our 200-year history in a soil laced with the toxin of racism. Like our state and country, our community was long home to both overt and covert white supremacy, in our laws, culture and mores. Generations have struggled together to make progress in Bloomington, to eliminate many legacies that persist. We know much remains to be done, and that we must redouble our efforts to stand together and affirm our belief in inclusion and welcoming and opportunity for ALL.

That’s why it’s so important to respond — together and directly — to racism whenever and wherever it appears. We report hate and bias incidents, annually compiled and published by our City’s Human Rights Commission. Our community teems with individuals and organizations that work every day to weave that big, wide welcome mat that we want to be as real and inclusive as it should be.

One place where that welcome mat is vital is at the Bloomington Community Farmers’ Market, where, for decades of Saturday mornings, residents and visitors have gathered for fellowship and community-building along with their fruits and vegetables. The City has run the market through those years, explicitly committed to offering a space “where all can feel welcome and safe regardless of race, religion, color, national origin, ancestry, sex, disability, sexual orientation, gender identity, veteran status, housing status, or disability status” (as stated in the vendor handbook).

The City will not tolerate any vendor displays or behaviors at the market inconsistent with that fundamentally welcoming environment. We will vigorously protect against any behaviors that threaten those values. On the other hand, we must also comply with the US Constitution’s First Amendment, which prohibits governments from restricting individuals’ rights to believe and speak as they choose, within very wide ranges, including those who sell at (or attend) a City-run farmers market.

Repeatedly and consistently throughout the last century, the US Supreme Court has said that government may not silence or punish people for disfavored beliefs, in cases involving viewpoints including Communists, anarchists, civil rights protesters, and Nazis. Our constitutional government’s prescription for odious speech isn’t government control or censorship. It’s MORE SPEECH. That is, our community, including this Mayor, can make clear our values, even when our government cannot directly intervene.

That’s why it’s vital that individual Bloomingtonians and groups are stepping up and making their presence known at the market.  To stand against hate and bigotry. Period. To welcome and embrace people without regard to all those characteristics used throughout history and still today to divide us one from another. To spend our money thoughtfully, knowing who we are buying from and how our purchases affect the wider world.

That’s why as Mayor I want to make clear my loud condemnation of racism and bigotry, and my commitment to do all we can to keep working together to pull them out, root and branch, from our common soil. They and their descendants, privilege and implicit bias, continue to fester, demanding our vigilance and energies every day.

Clarification of Long-standing Rules of Behavior for the Bloomington Community Farmers’ Market:

Signs and distribution of literature at the Market by the public:

Is permitted within the Market:

Signs and distribution of literature at Market by vendors: