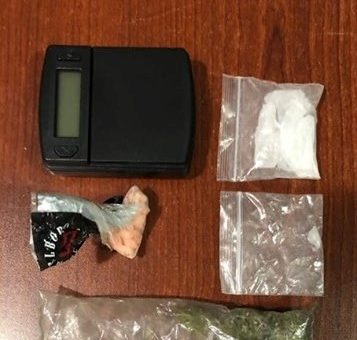 (PAOLI) – In March 2019, after receiving credible information, Paoli Police Department Officers began investigating a Paoli man who was alleged to be actively involved in the distribution and sale of meth within the Town of Paoli and throughout Orange County.

At the conclusion of the investigation, the suspect and two associates were arrested on meth-related charges.

Officers learned that 44-year-old Aaron “Gus” Kellams, of Paoli, was traveling to Louisville, KY. to purchase illicit drugs and would return to Orange County to distribute them.

Police say Kellams did this several times a month.

With the assistance of the Louisville Metro Police Narcotics Division, Paoli Officers confirmed this activity.

After a lengthy, collective investigation, Paoli Police officers made arrangements with LMPD detectives and Orange County Sheriff’s deputies to make contact with Kellams upon his return from Louisville.

Kellams was driving the vehicle and he had two passengers – 37-year-old Kimberly R. Scott and 64-year-old Richard Wilder, both of Paoli.

All three were detained while Orange County Deputy Ryan Smith and his K-9 partner Flinn did a search of the vehicle.

Flinn alerted officers to possible drugs inside the vehicle.

During a search of the vehicle, officers seized several pills, a digital scale, and other drug paraphernalia.

All three occupants were arrested and taken to the Orange County Jail.

“By working together, this case was successfully closed and the suspects can now answer for their alleged crimes and justice can be sought,” says Paoli Police Chief Randall Sanders. “Once again, these arrests stand to reflect the Paoli Police Department’s strong commitment to bringing justice to those who distribute these dangerous drugs in our town and to our citizens. We are and will remain determined to disrupt the sale of methamphetamine and other dangerous drugs within the Town of Paoli. We continue to work closely with our local law enforcement partners to investigate, arrest, and criminally hold those accountable for committing illegal drug offenses within Paoli and throughout Orange County.”

Anyone with information or those who witness suspicious activity within the Town of Paoli is encouraged to report the activity to the Paoli Police Department by calling 812-723-2836. Tips can remain anonymous.