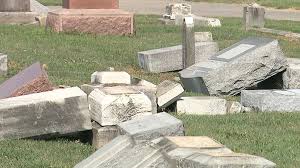 (JEFFERSONVILLE) — At least 40 tombstones were knocked over at a cemetery in southern Indiana, prompting people to rush out to check on their loved ones’ graves.

The (Louisville) Courier-Journal reports word spread Sunday about the vandalism at the combined St. Anthony and Eastern Cemetery in Jeffersonville and at least a dozen people went there to check gravesites. Some gravestones were broken, and most of the damage was toward the center of the cemetery just north of Louisville, Kentucky, where some graves date to the 1800s.

Patty Burger, of Jeffersonville, cried after she found that her parents’ tombstone, as well as one for her aunt and uncle, had been knocked over. She asked: What “sick human being” would do such a thing?

The vandalism was reported to the police.