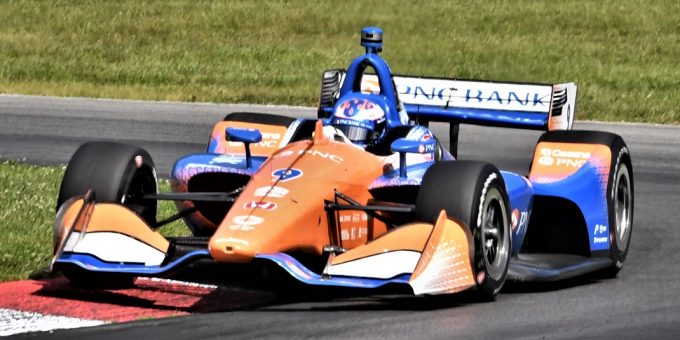 (LEXINGTON, OH) – It was a one-two Chip Ganassi finish on the road course at Mid-Ohio Sunday.

Scott Dixon took his 46th career IndyCar win holding off a late surge from his teammate Feliz Rosenqvist. At the finish line, Dixon just edged out Rosenqvist by less than a second in third closest finish in the closest finish ever at Mid-Ohio.

“That was crazy,” Dixon said. “I feel bad for Felix there, I put some moves on him, but those tires were shot. If I wasn’t his teammate he probably would’ve had me off. All that counts is we got the win. I think we helped our championship run.”

Points-leader Josef Newgarden spun out in a section of the track known as the “Keyhole” on the final lap of the race while trying to pass Ryan Hunter-Reay, who ended up finishing third. An 14th place finish for Newgarden with that spin out lost him ten points of his points lead over Alexander Rossi.

“Forced the issue probably, trying to get on the podium,” a dejected Newgarden said after the race. “My fault for trying to force the issue there. Just were we could have done more there in the end. Just wasn’t meant to be.”

Newgarden’s 504 points on the season still leads all drivers in the overall points standings with just four races left. Rossi is just 16 points back in second and Newgarden’s teammate Simon Pagenaud is third 57 points back. Scott Dixon is fourth 62 points off the lead.