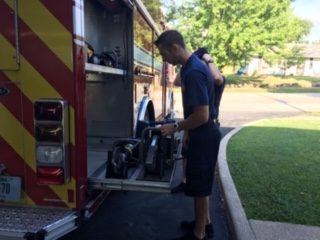 (BEDFORD) – The Bedford Fire Department brought its firefighting crew up to full strength at 37 firefighters with the hiring of 32-year-old Joseph Chastain.

Chastain is a 2005 graduate of Bedford North Lawrence High School and, after being a sworn in, began his firefighting career on July 14, 2019.

Chastain is married to his wife, Brittany, and has two daughters named Bella and Charlee.

Firefighters go through the hiring process after submitting their application to the Bedford Fire Department. A hiring committee then looks over the available applicants and then makes sure they meet the qualifications and criteria that the fire department requires.

Applicants are required to take a written fire science test. Next, the applicant will be interviewed by the hiring committee. The applicant is then given an overall score, and the committee makes a final selection on who they feel is the best fit for the department.

Once the selection is made, the person is then evaluated in Indianapolis for physical and physiological stability based on the 1970 Police and Firefighter Retirement requirements. The evaluations are either pass or fail.

Chastain’s first fire run was to the Englewood Cut Stone building on 10th Street in Bedford. He has also been on-site for a few vehicle fires.

Being a probationary firefighter, Chastain will be evaluated every six months. At that time recommendations may be made. After a year, another evaluation is performed. If that evaluation is positive, the applicant officially becomes a firefighter based on approval.

Chastain is currently on the third shift at the department under the supervision of  Battalion Chief John Gould and Captain Bruce Deckard. Chastain has been assigned to Rescue One at the Central Fire Station on H Street.

When Chastain starts his shift, he starts getting the trucks ready for the day and then heads on to breakfast. Work continues cleaning the fire station and then learning other department policies and procedures. A full day’s work usually consists of eight to ten hours.

Chastain has not had to cook for the crew yet. Asked if he was a good cook, he said, “I am not that good of a cook but will be learning the trade. We already have a good cook on the shift. I was a member of the Shawswick Fire Department for the last year and a half and have completed Firefighter I and Firefighter II training as well as an Emergency Medical Responder.”

The rescue truck made over 700 runs in 2018, responding to city and county traffic accidents, making rescues and cleaning up accident scenes. In addition, the department conducts at least one live training exercise at the drill tower at Murray Forest Park according to Fire Chief Dewayne Turpen. All Bedford Fire Fighters are Emergency Medical Responders and are a Non-Transport Provider with a heart defibrillator located on a truck at each of one of three stations.