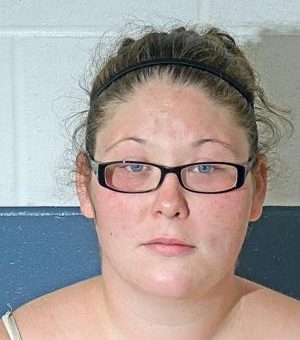 (HELTONVILLE) – Lawrence County Sheriff deputies arrested a pregnant woman on Friday after she allegedly hit another woman and stole her medication.

Police arrested 26-year-old Jasmine Streets, of 21 Locust Road, on a charge of domestic battery in the presence of a minor.

According to a Lawrence County Superior Court I probable cause affidavit, officers were called to the home at 12:36 a.m. after the victim dialed 911.

The woman told police she confronted Streets about her missing medication. Streets allegedly pushed her and hit her on the head, causing a cut.

Streets told police she had not taken the medication, but she had in the past. She claimed she was addicted to pain pills but was fighting that addiction.

Streets told police that the accusation made her angry and she admitted to shoving and hitting the woman.

There were children in the home during the altercation and officers alerted the Department of Child Services.

On Tuesday, Streets appeared before Judge John Plummer III and he entered a plea of not guilty on her behalf. She was ordered to have no contact with the victim. A pretrial conference is scheduled for September 11, 2019 at 9 a.m. and a jury trial is scheduled for January 15, 2020, at 8:30 a.m.