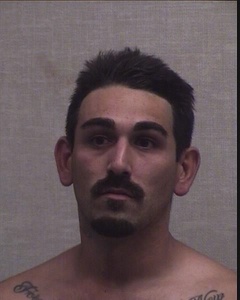 (SEYMOUR) – A 30-year-old Seymour man was arrested on Friday on three charges of burglary resulting in bodily injury following an incident on July 10, 2019 at the Sycamore Springs apartment complex.

The woman told police she had arrived at the apartment complex around 3 a.m. on July 10, 2019 with two children and was met by Romero in the parking lot. Police say she and Romero had previously been in a relationship. She told police Romero approached her and ripped her purse off of her shoulder.

The woman and children were able to get away and ran into the apartment. She then called the police.

A short time later, Romero climbed up to the woman’s balcony on the second floor and was looking through the glass sliding door asking one of the children to open the door. The woman took both children into a bedroom of the apartment.

Police say Romero then pried the door open and entered the apartment.

He grabbed one of the children’s cellphones and threw it against a wall, shattering it. He then allegedly took a pocketknife out of his pocket and threw it at the child.

Romero then grabbed the woman by the arms and threw her into a corner of the bedroom. He then began throwing random objects at her.

He then left the bedroom and took a PlayStation 4 from the living room and left.

On Friday, Seymour Police officers received information that Romero was hiding in a garage in the 800 block of West Laurel Street. He was located and arrested. He is being held in the Jackson County Jail without bond.