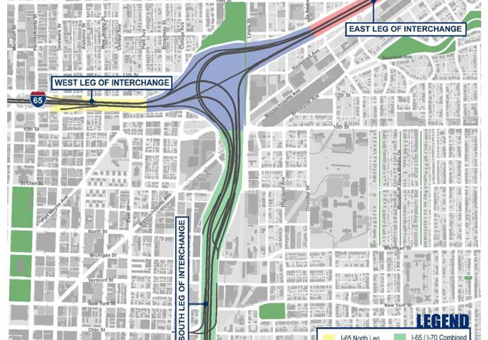 (INDIANAPOLIS) – The first round of public meetings are set to happen soon as INDOT leaders want to hear from the public about what they would like to see from a planned revamp of the North Split.

The project is expected to cost around $300 million dollars to upgrade the interchange where I-65 and I-70 meet in downtown Indianapolis.

According to INDOT the upgrades are desperately needed since the interchange is the second most heavily traveled interchange in Indiana. With that heavy travel comes worn out pavement, structural damage, and dozens upon dozens of traffic accidents.

The first meeting to discuss the project with the public will be will be Saturday morning at the Concord Neighborhood Center on South Meridian Street. Residents who live near the interchange, such as those in the the Windsor Park neighborhood, will be able to meet the design team for the project.

“I’m sure there will be upsides to it. Of course, I have concerns. There are ramps being taken out that we use very frequently,” Kylie Sempsrott said. “I’m interested in solutions.”

The team is not only in charge of planning out the design of the new interchange, but also what will be going in around the interchange. That’s where many Windsor Park residents have a lot of ideas.

Many of the resounding ideas are things like bike paths, green spaces, and better lighting around the interchange.

The whole project is likely to begin in the fall of 2020.