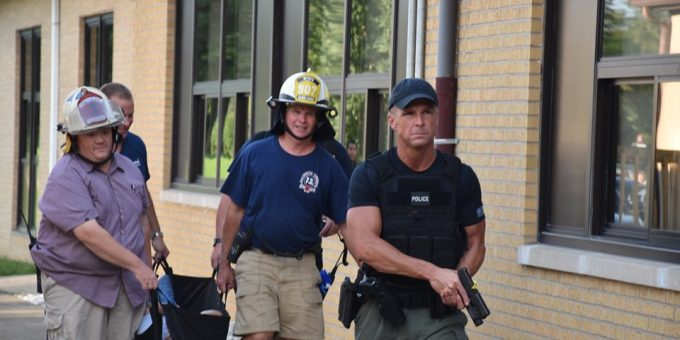 New training guidelines have added a new aspect to the response. “Rescue Task Force” was developed from details of real-life events.

Getting emergency medical personnel to the victims as quickly and safely as possible is key to the survival of the injured. The county’s first responders have trained on “stop the bleed” techniques in addition to the use of the Rescue Task Force. This training leads up to a full-scale exercise at a local elementary school.

The exercises include different scenarios with various shooting situations played out with multiple victims being injured during each event.

The training in this controlled environment helps teams learn their strengths as well as educate them on areas where they need to improve.

Participating in the training were the Washington Police Department (including Dispatchers), Daviess County Sheriff’s Department (including Dispatchers), Daviess Community Hospital EMS, Daviess County Emergency Management, Washington Fire Department and the volunteer fire departments of Washington Township Fire, Southeast Fire District, Veale Fire District, and Cannelburg Fire. A special thanks goes out to Washington Community Schools for the use of Veale Elementary School. Thanks also go out to Camp Illiana for allowing a staging area to be set up on site for the exercise. Officials also want to thanks the “victims” which included members of the Washington High School ROTC and Washington High School Band.